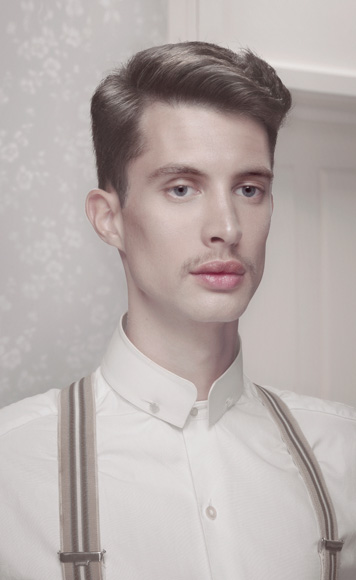 Recent Work, Erwin Olaf's second solo exhibition at Hamiltons introduces London to Dawn & Dusk, first shown at The Museum of The City of New York. It also features new images from the series Hotel, initiated in 2008 with Hotel 1, Kyoto; a continuation of Olaf's exploration of mood, period and style as begun in his trilogy Rain, Hope and Grief, shown at Hamiltons in late 2008.

These photographs feature models posing sometimes elegantly, provocatively or demurely in replica hotel guest rooms across the world with subtle differences such as a discarded shoe or a lit message on an answer phone. Particularly influenced by the early 1960's, the décor and lighting make reference to this era and are further underscored by the diluted colour palette of avocado greens and muted pastels. Influenced also by his own travels and accompanying feelings of transience and anomie, Olaf's models gaze into the distance and evoke an uneasy, disconnected sense of mystery; a sense of internal restlessness or longing. Their cinematic nature reflects Olaf's evolution as an artist, leaning towards a greater story that draws one in.

'The older I get, the more I start to realise that I am more influenced by cinema than by photography. Although there are big beautiful photographs - when you are going to the cinema, you can always make up your own story. You have more emotion. I never cry over a photo, but I cry over a movie, or music or literature. That makes me a bit jealous, so I want to achieve that in my photography.' Olaf.

Dusk was originally commissioned for Dutch Seen: New York Rediscovered, at The Museum of The City of New York. The exhibition was curated by Katy Ryan, long-time director of photography for The New York Times Magazine; in order to celebrate New Amsterdam, four hundred years of Dutch history in New York. Dawn, in turn, was Olaf's response to Dusk; mirroring the images and inverting their dark tones - playing them out in a cool, white field.

Dusk was inspired by The Hamptons Album, 1900, photographed by Frances B. Johnston and exhibited at The Museum of Modern Art, New York. Here, Olaf responds to and recreates this remarkable photographic record of middle class Native and African-American students at a school in 19th century Virginia. He describes the work as a 'dark comic strip' for which he does not himself fully understand the content; the narrative is strong but not clear and the characters indicate some sort of personal, though vague, drama. Dawn, on the other hand, is an aestheticised mirror of Dusk and concentrates more purely on form. Everything is white except for the light pink skin tones and the scenes seem stripped of meaning.

'Since working on Rain, Hope and Grief, I am not exactly sure what I want to talk about. I am getting older. I have more doubt. I do not know where I will end up. While I was shooting the Dusk series I still did not know the answers. Now that I am finishing Dawn I am finally realising what I am saying. Not that I can say in words exactly what this is, but I know it. The best is when it remains a question mark.' Olaf.

Born in Hilversum in 1959, Olaf continues to live and work in the Netherlands where he graduated from the Utrecht School of Journalism in 1980. His photography has been exhibited internationally in both individual and group exhibitions with works residing in many significant public and private collections. Solo exhibitions include, Institute Neerlandais, Paris; Domus Artium 2002 (DA2), Salamanca; Photo Museum Antwerp; The Grand Manege, Moscow Biennalle of Fashion and Photography; The Hague Museum of Photography; Hasted Hunt Kraeutler, New York and Museum Forma, Milan amongst others.