Prague through the lens of the secret Police 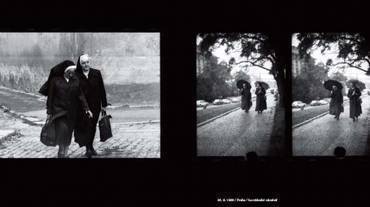 Prague's Institute for the Study of Totalitarian Regimes and subordinate Security Services Archive opened their doors in February 2008, with a government mandate to study and evaluate the period of Nazi occupation and Communist rule and make public documents and archival materials from the security services of the former totalitarian regimes in Czechoslovakia.

One of the most unique projects resulting from the opening of the Czech archives has been the release of the book Prague Through the Lens of the Secret Police and its companion travelling exhibition, both of which unveil photographs taken in the course of secret police surveillance during the “normalization” era of hard-line socialist entrenchment after the 1968 Soviet-led occupation of Czechoslovakia. The images therein are not random snapshots, but rather the result of precisely planned operations staged by the Surveillance Directorate of the Communist State Security Service (StB). The goal of “tailing unit” policemen was not only to shadow persons of interest, but also to obtain documentary materials that the StB could use as incriminating evidence against those who were not comfortable to the regime.

The photographs and related films featured in the exhibition now serve as chilling evidence of the state-prescribed “struggle against the internal adversary,” which had agent operatives monitoring Czechoslovak citizens, emigrés and foreigners using variously disguised miniature cameras – concealed in briefcases, a playing transistor radio, lighter, inkstand, and even a baby carriage.

The exhibition premiere took place on April 7, 2009 at the Permanent Representation of the Czech Republic to the European Union in Brussels, where it was on view through the end of that month within the scope of the Czech Republic's presidency of the EU Council. It has since shown in Luxembourg and Stockholm in Europe, and in the United States at Washington, DC's Woodrow Wilson International Center for Scholars and Harvard University's Center for Government and International Center. After its showing in New York City, it will tour throughout the world by arrangement with the Czech Centers.