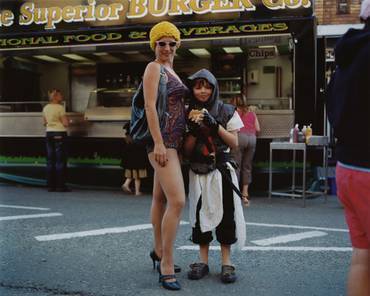 Dave Lewis is a photographer and film-maker interested in identity and the ways in which people feel they belong to a particular place. Field Work is a new body of work generated through Lewis' innovative combination of the role of the artist as a 'stranger', and that of the anthropologist as someone concerned with understanding cultural identity. In the process of gathering first-hand evidence in two particular locations, Sway in the New Forest in Hampshire, and Newtown in mid-Wales, Lewis draws productive parallels between these two roles, suggesting the way they pursue similar methods of investigation and share some common aims. Sway and Newtown are linked through this process of interviewing local residents and documenting events such as festivals and carnivals. At the same time there is a more reflexive moment in which the 'stranger' mediates on the land he sees but does not understand.

The resulting work examines the role of the individual within society, how boundaries with outsiders are perceived, and how both of these relate to how people identify themselves with a particular place and cultural identity. The exhibition as a whole seeks to problematize issues around race, environment and identity weaving these themes into complex narratives that question the viewer's own attitude and understanding of what it is to belong.

For his exhibition at ArtSway Lewis will present a series of large-scale landscape photographs taken on the outskirts of Newtown and Sway, as well as video work which presents two filmed 'journeys' following the 'stranger' as he conducts his research.

Dave Lewis gained a BA (Hons) in Film and Photographic Arts from the Polytechnic of Central London (now University of Westminster). He has recently finished as a Visiting Research Fellow at Goldsmiths University of London, Department of Anthropology.