THE ART SHOW : The Horizon in 19th Century Photographs 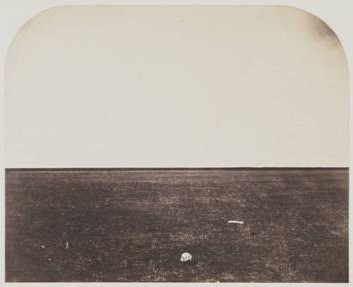 The limits of the earth’s resources are increasingly apparent. Our earliest photographs of natural beauty and man-made monuments suggest that a lasting legacy of these works is not solely aesthetic, but also a prescient reminder of how the medium of photography was instrumental in establishing an environmental awareness among its earliest audiences.

Among the highlights in The Horizon in 19th Century Photographs will be Humphrey Lloyd Hime’s The Prairie Looking West, 1858, a coated salt print from a glass negative. This rare image of the vast expanse of the Canadian Plains is perhaps the earliest image of a perfectly flat, unbroken horizon. The startling presence in the foreground of a skull and bone make this view all the more dramatic.

Roger Fenton became widely known for the first serious and extensive photographic documentation of a war. The Crimean War (1853 -1856) was the first major conflict to take place after the invention of photography. Fenton’s sweeping landscape, Kadikoi, from Camp of Horse Artillery, 1855, a salt print, shows a surprisingly peaceful, though devastated, military campground after a battle.

Félix Teynard’s monumental Égypte et Nubie, a book of 160 calotype plates, was published in 1858. A rare, unpublished variant salt print of the panorama of Abu Simbel from across the Nile, 1851-1852, is on view. This untrimmed print, believed to be unique, shows the full negative.