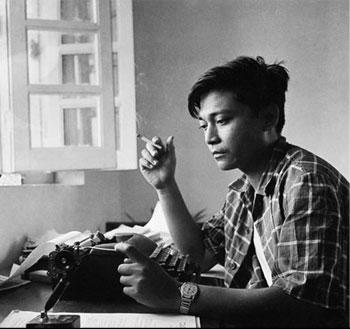 It is with great pleasure we begin 2010 with A CRITIC’S EYE, an exhibition of photographs by Richard Bartholomew (1926-1985). A writer, art critic, curator, painter and poet, is how Bartholomew is remembered. Bartholomew’s love for literature and art remained lifelong companions and he became one of the finest voices in art criticism in India. He was one of the first art critics to start a serious dialogue with the painters of his time. He created a community with them and engendered a sense of direction at a time when the public was not fully receptive to the bold artistic exploration of India’s Progressive Art Movement. His photographs however, remained a more private introspection of life around him and were rarely exhibited. Twenty-five years after his death, we visit his archive and discover an intense and sophisticated eye that provides a rare glimpse into the beginnings of Modernism in India. He recorded art and its practitioners with a custodian’s eye. Ever watchful and yet unobtrusive, like the man he intrinsically was, Bartholomew perhaps understood the evidentiary and historical role of the photograph. That many of the artists he photographed became significant underscores the importance of his archive today. When he photographed his wife and sons, the same watchful eye sought comfort in observing, but from a distance. He watched them sleep and read books as the years went by and the photographs are unusually tender and yet unsentimental. When he photographed on his travels in India and abroad, his attention to the banal detail reinforced his profound engagement with photography. He looked for the peculiar, the mundane and configured it with meaning that only a highly attuned mind would.