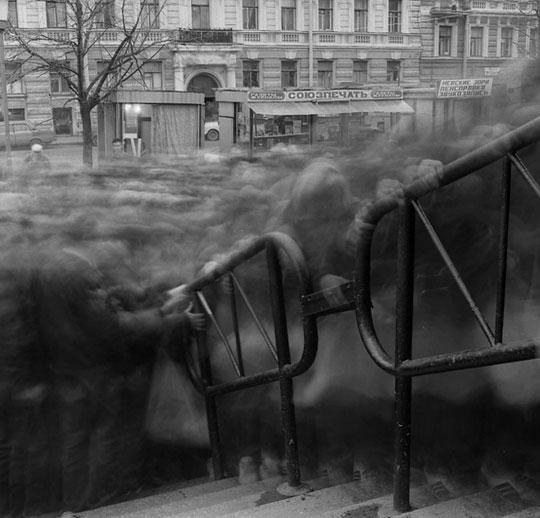 This will be Alexey Titarenko's first major exhibition in New York that features his entire St. Petersburg series (1991-2009). The four underlying sequences, or movements – to borrow a term from the vocabulary of music, which features prominently in the artist's mind, are The City of Shadows, The Anonymous, The Light of Saint Petersburg  and Unfinished Time. Like music, the expression of time is a presence in Titarenko's art, associated with literature and in particular, the works of Marcel Proust.

This majestic and history-laden city, where Titarenko was born in 1962, is the central subject of his photography, or to be more accurate it is the soul of the city and therefore that of Russia. As the artist himself explains:
"It would be en error to consider my photographs within the context of the values now fashionable in the arts in general and photography in particular. To align them with such and such a trend, without taking into account that their very purpose in existing is defined by the past. Even the most factual of them are not reportage, but a novel. The principal motivation for their creation is, in fact, always the same: Russia's history throughout the 20th century, which is an unending series of tragedies of ever more baffling dimensions, whether you consider the wars, the famines or the so-called times of peace. The history of Russia... but in the form of rather contemporary images, made in a single location, a single city – St. Petersburg. Rather than the city (which is mostly only vaguely visible), these images represent emotion - the range of emotions forming the deep inner character of the people who lived in this country and endured all these disasters, people who were usually only represented from outside. And it is therefore these emotions which, in themselves, are quite general and have remained unchanged in the course of the century, like the emotions aroused by the music of Shostakovich, for example, or by the novels of Solzhenitsin, which are the true subject of my photographs, and my goal would be to convey them to the viewer, to make him or her feel them ... understand, to feel compassion and love."