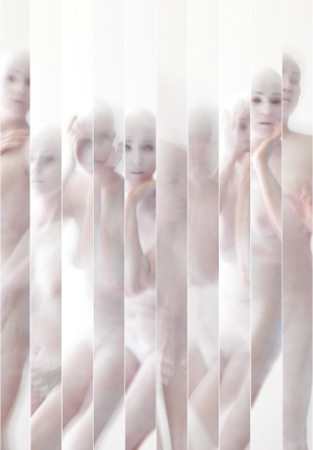 1294 SUNSET is pleased to announce the opening of a solo exhibition, Aperture Fiction, by Marie du Petit Thouars

The 13 works exhibited demonstrate the elusiveness of Marie du Petit Thouars' s photography, with the common thread being an atmosphere of solitude. Each of her subjects move independently from the next, but seem to dance together in a familiar loneliness.

Using natural light, long exposure and movement to capture the story of the image, one is not sure if they have entered a nightmare or a dream.

Born in Elgin, Illinois, Marie grew up in Europe and studied drawing in Florence, photography in San Francisco, and comic illustration in Brussels. She was also a Fashion Editor for seven years in Paris at publications such as The London Sunday Times, Le Monde, L'Officiel and French Vogue. She is still very close to European culture which is often represented in her work.

Her work is printed from her studio in Los Angeles, where she has resided for the past 3 years.

In 2009 she exhibited for Art Brussels and her photographs are soon to be published in "Les Dessous Féminins"  by Sirrocco-Parkstone International  out of London.

This is the inaugural exhibition at 1294 SUNSET, a new artist-run space in the Los Angeles district of  Echo Park.