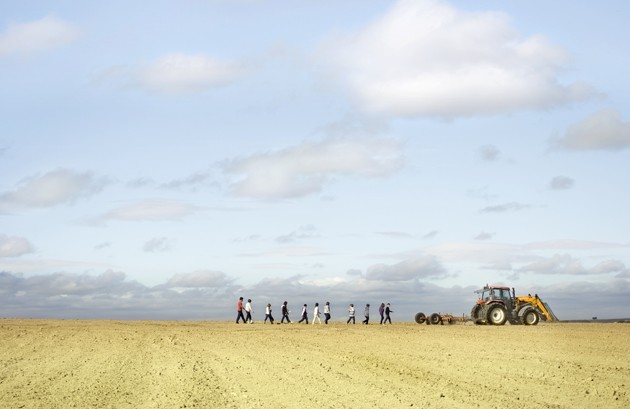 The exhibition represents a new challenge for the artist, enabling her personal sensibility to emerge, although it also marks the social aspect of her artistic quest. In her art, the collective nature of work is at the heart of a methodology based primarily on 'participation' rather than collaboration, where the artist plays the role of mediator (featuring).

The main themes are developed in a variety of expressive forms (from video to installation, painting, drawing, photography and performance) and they prove to be a versatile tool, fashioned around the personal quest of the artist.

In the installation in the first room, which marks the beginning of the exhibition itinerary, the traces of memory of places that have been seen or lived in (like an American motel in two different moments of the day) find a form with references which are precise and yet undefined at the same time, becoming places of possible happenings; the main role is reserved for the light which becomes the key to the narrative itinerary which the artist also offers to the spectator in order to be completed.

In the video How do U kill the chemist, (made during the artist's stay in New York), a group of rappers from Harlem introduce the story of the chemist Adrian Ghole who, after discovering the successful formula for a new type of rubber tyre, was killed by his factotum Bassil for financial motives. However, as fate would have it, as the man was crossing the Hudson bridge with the corpse of the professor in the boot, he was stopped by a festive crowd to receive a cash prize as the millionth driver to cross the bridge that day. The account of an act of violence that really took place in New York is merely the pretext for sparking off the artistic process; it shows us the interpretative spaces that such a process can reveal, amid sequences filmed on the spot and original film footage. An everyday object such as an iPod, made available to the public, provides the support for a more intimate and interactive use of the work.

The last room is the site of another challenge: painting, a typically intimate artistic practice, is revealed and opened up to collective practice, evoking the experience of the inhabitants of Alaraz in Spain during the construction of a rain machine for an event in the main square of the town. The paintings offer a synthesis of the relationship between the vision of the artist and her practice within the local community, opening up a broader historical dimension to which all of us contribute in a fairly conscious way.