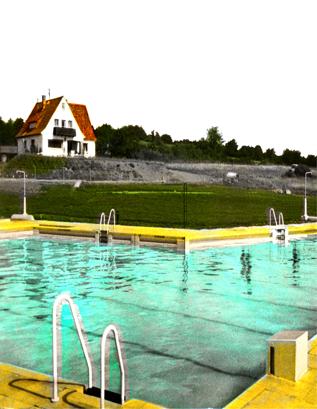 "Schon war’s!" (It was nice!) is the title of the recent photographic-series (from 2007-2009) by Stefan Hunstein. A book on the series has been published in German and English in december 2009 by the prestigious art publisher Hatje Cantz Verlag. The work has been exhibited at the Hamburger Kunsthalle and the Allgemeiner Konsumverein (Braunschweig). On february 4, 2010, the series of more then 100 photographies and the book will be presented at the Haus der Kunst (Munich). After a welcoming speech by the director of the museum, Chris Dercon, Petra Giloy-Hirtz, author and publisher of the book, will give an introduction to Hunsteins work. The next stop of the installation will be at Villa Merkel (Esslingen, March 28–June 6, 2010).

Stefan Hunstein repeatedly works with photographic source material, which in his eyes is testimony to our collective memory. In the past several years, he has been exploring recent German history with the aid of images dating from the thirties to the sixties.
In his work, "Schőn war’s!" (It was nice!) Hunstein employed postcard motifs from the young Federal Republic of Germany from the fifties and sixties, manipulating the images and adding color to some of them. He was particularly interested in the question of the ideals and desires of a society in a phase of reconstruction. And since picture postcards reveal much about the ideals and self-perception of a society, all told the works create an impressive "panorama of longing" in a society shaken by war.