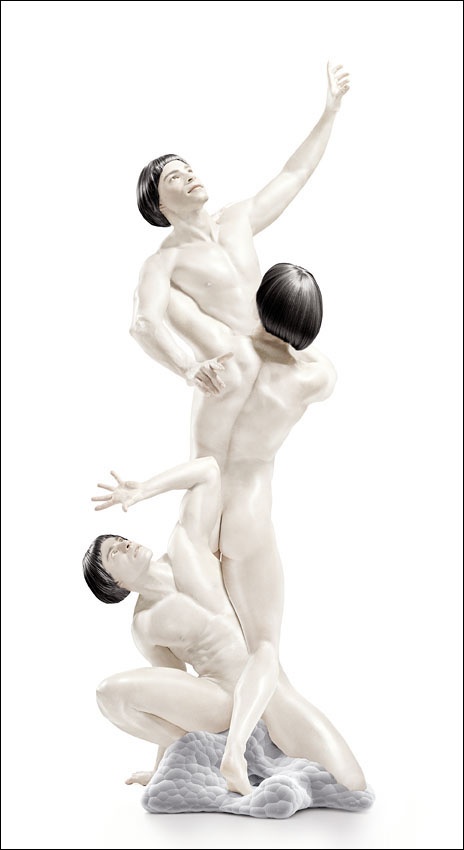 dvorak sec contemporary is pleased to announce the first solo show of new media artist Michael Najjar in the Czech Republic. On display will be large-scale photographs from the internationally renowned artist's bionic angel series, curated by Olga Dvorak for the Prague gallery space.

Michael Najjar's works explore the impact of advances in (digital) technology on contemporary society. He creates visions and utopias of future social structures in a continuous flux due to the influence of modern technologies.

"The central theme on my art is the telematic society. I deal with the key components of a society driven and controlled by computer and information technology. My works reflect contemporary developments and create visions and utopias of future social structures emerging under the impact of new technologies. Projections of the future render obsolete old modes of perception and activate novel ways of seeing. My utopias stand in a relation of direct or inverse analogy to real social space."

The photographic series bionic angel investigates the process of transformation and the technological control of human evolution. Rapid developments in the field of so-called 'g-r-i-n-technologies' (genetics, robotics, information and nano-technologies) are not only changing our bodies, minds, memories, and identities, but are also impacting our offspring. These new technologies all share a common aim of enhancing human performance. Prenatal genetic determination enables children to be built to plan. Clone bodies become depositories for ersatz organs whilst manipulation of atomic structure creates new bodies which far outstrip the old ones in terms of robustness, elasticity and durability. Based on genetic algorithms and neuronal networks, these developments essentially mean that biological evolution can now be controlled; they open the door to a new and superior form of existence for the human being.

Bionic angel refers to such idealized body worlds from antiquity and the renaissance, drawing inspiration from themes of 'metamorphosis' from classical Greek mythology and the roman poet Ovid. Scenes showing beings in the very midst of transformation of a technology driven metamorphosis, articulate the inevitability of genetic self creation in man's ongoing quest for perfection and immortality.