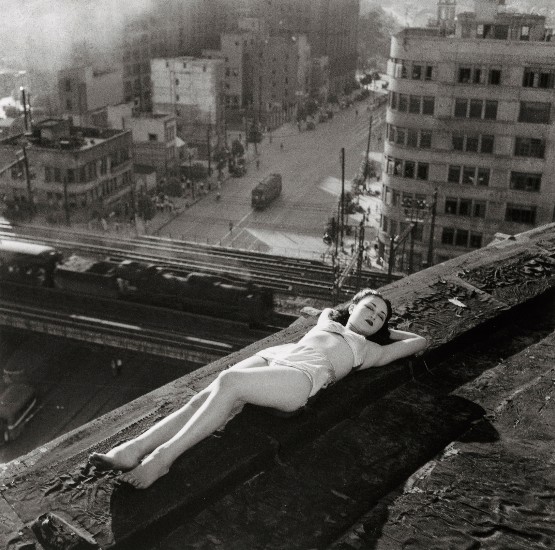 Focusing on street life, its spontaneity and drama, three of Japan’s leading photographers document a city in change. With close to 100 rare prints, many of which have previously never been seen outside of Japan, Tokyo Stories reveals the changing faces of Tokyo from the 1930s until the present day.

Tokyo is a city of contrasts, a kaleidoscope of images, where the futuristic present thrives alongside the traditional past. The exhibition reveals the city through its people: student protests, political intrigues, the birth of ‘salary men’ and their endless workdays, geishas, prostitutes, street orphans, writers, artists, designers and fashionistas, all of these characters collide to create this city of layers and contrasts.

As a native of Tokyo, the city naturally became Hiroshi Hamaya’s (1915–1999) first photographic subject. His images taken in the 1930s reveal a mysterious and exotic city, light years away from the megalopolis we know today. Tadahiko Hayashi (1918–1990) captured the physical devastation of Tokyo in the aftermath of the Pacific War and the determination of its inhabitants to build a better future amidst the rubble. Shigeichi Nagano (born 1925) has photographed the city for close to 60 years, bearing witness to the radical changes the city underwent during its modernisation whilst still holding on to its traditional past.