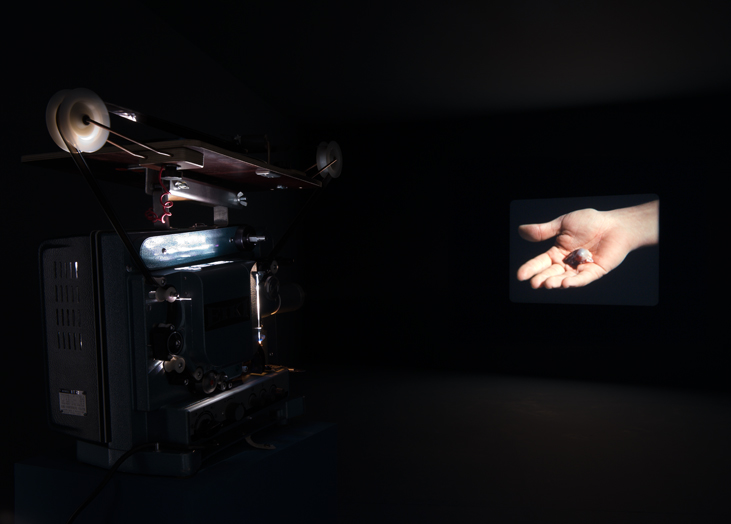 Laurent Montaron (born 1972 in Verneuil-sur-Avre, lives in Paris) is regarded as one of the most interesting upcoming artists of a younger generation both in his native France and abroad. His solo shows at Kunstverein Freiburg, at Institut d’Art Contemporain in Villeurbanne/Lyon, at FRAC Champagne-Ardenne, his solo presentation at last Frieze Art Fair (Schleicher+Lange Gallery) and numerous participations in international group exhibitions have placed his work firmly into the European discourse. Montaron works in various media: film, video, photography and sculptures, as well as sound installations. The focus of his interest is the exploration of visual representation codes: Montaron questions the relationship and the conflicts between image and reality, of each narrative and its interpretation.

The exhibition at the Kunsthaus Baselland is entitled "Pace", named after the film installation of the same title. Pace is a 16mm film projection behind a wall and a stained glass window, which shows the beating heart of a carp held in the palm of a hand. The slightly insulated noise of the projector and the vibrating of the heart freed from the body form an acoustic symbiosis; the window emphasizes the voyeuristic element in the observation of the image. Montaron examines in equal measure the unpleasant and the beautiful, but leaves open whether this is a "real" or a "fictitious" image.

The HD film 'Will There Be a Sea Battle Tomorrow?' (2008) is based on the social and scientific recurring interest in supernatural experiences. A machine from the Institute for Parapsychology in Freiburg, called Psi-Recorder, is in the focus of the film. This device is able to generate random numbers that can be used for experiments that investigate the phenomena of telepathy, clairvoyance, and foreshadowing. Laurent Montaron's interest in equipment and instruments from a pre-computerized, bygone time is constantly palpable. Thus, the anvil 'D' (2010) at the entrance to his exhibition appears as a visual code that refers to a completely different time, in which hooves were shod or other rectangular or round shapes were hammered. The object bears the engraved inscription: 'Is not this what we like to believe rather than being left to the night?', a phrase from the video 'Will There Be A Sea Battle Tomorrow?'. Montaron opens the exhibition with a general matter of belief, which also applies to art: Do we want to believe it, or do we prefer to leave it to the darkness of the night?