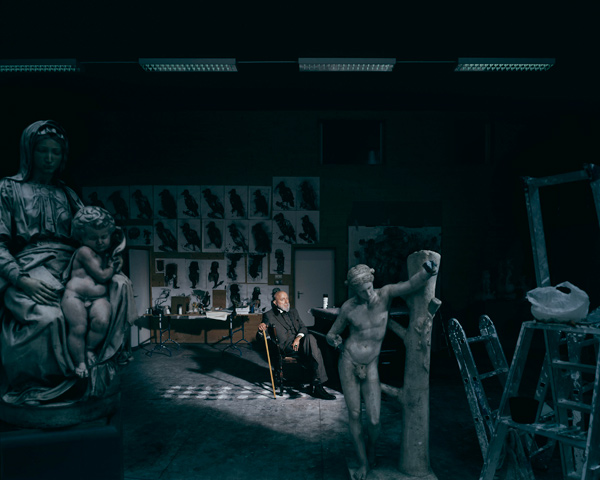 The photographs of the artist, who was born in 1979, are often described as romantic, mystical and even sometimes as profound and mysterious. F.C. Gundlach, the doyen of German photography, is a firm advocate of Andreas Muehe. He curates the exhibition in cooperation with CAMERA WORK.

F.C. Gundlach already early on praised the exceptional consequence of Andreas Muehe's work:
"In his so far short career, Andreas Muehe, who was born in former Karl-Marx-Stadt, has created a work of an exceptional consequence. His use of camera technique is virtuosic; he arranges complex and sophisticated lighting concepts, and has worked for the most significant magazines within the span of only a few years. He stages his portraits and group pictures, for which he predominantly uses a large-format camera, with greatest detail. The people who are portrayed trust him, and their individuality, unapologetically candid and close, rises from the pictures."

The exhibited portraits - reduced to and focused on the essentials - show artists and actors like Markus Luepertz, Jonas Burgert, Daniel Bruehl, or Hannah Herzsprung but also writers or politicians such as German Chancellor Angela Merkel or George Bush, Helmut Kohl and Michail Gorbatschow.

Often, the people in Muehe's pictures are surrounded by stunning architecture or landscapes. Muehe's predominantly static compositions convey dignity and energy.
Andreas Muehe works for renowned journals, agencies, and organizations. His series are and have been published in magazines such as Die Zeit, Kulturspiegel, Monopol, Der Spiegel, Stern, SZ-Magazin, Park Avenue, or Vanity Fair on a regular basis.