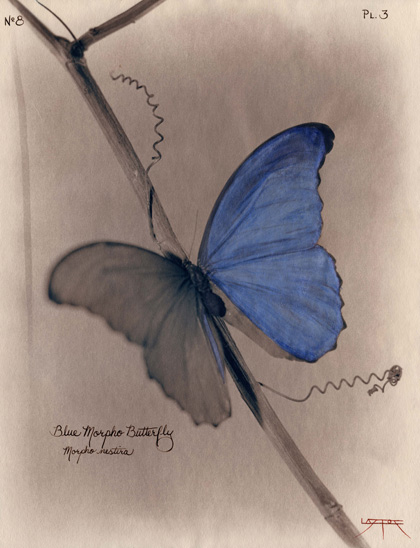 As a child growing up near the Phoenix Zoo in Arizona, Laszlo Layton spent summers there studying animals and natural history. He later worked in the motion picture industry for more than 20 years and spent his evenings and weekends painting.

When he read about contemporary photographers reviving 19th-century photo printing processes, he became fascinated by the oldest formulas for handmade photographic prints. He restored an old Deardorff studio view camera and was inspired to rediscover his youthful interest in zoology.

Cabinet of Curiosities and Pictorial Zoology
, two series of his photographs, are featured in The Atelier Gallery of the Griffin Museum.

Cabinet of Curiosities is inspired by illuminated books on nature from the 17th, 18th, and 19th centuries, illustrated with engravings and lithographs of drawings based on mounted specimens or written accounts by naturalists, rather than direct nature observation.

"What these illustrations may have lacked in scientific accuracy, they more than made up for in artistic expression," says Layton. "With this series, I have attempted to recapture and distill the essence of those old natural history illustrations, but through the photographic medium."

And, he says, "I plan to pursue this series for a number of years so that I can include a great many animal species that are extinct, rare, forgotten, or mostly unfamiliar, in addition to the better known wildlife. Many of the species I have chosen to photograph are, for personal reasons, somehow related to my own life experience, giving the series an autobiographical aspect, as well."

"I decided to loosen up my self-imposed rules and criteria for the images and introduce a more creative, and more photographic approach to my subject matter," says Layton. "Greater emphasis has now been placed on capturing the mood or attitude of the individual creatures, rather than how to best represent them in their entirety. The result of my interpretation of nature may be less scientific this time, but hopefully more artistic as the series continues to grow and evolve."

"Laszlo Layton's photographs are reminiscent of the scientific expedition specimen illustrations of wildlife artists such as Jacques Burkhardt or Louis Agassiz Fuertes," says Paula Tognarelli executive director of the Griffin Museum of Photography. "Through his Cyanotypes, Layton brings us a modern day explanation of animals using antiquarian methods of inquiry."