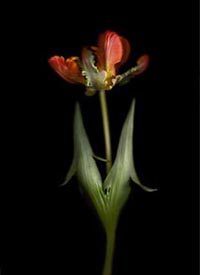 During the past two years the Dutch photographer Annet van der Voort called her atelier a floral laboratory. Here she observed the transformation of flowers, especially tulips, which she kept in order to use them in their various states of decay for her art. Her technique for producing these images is modern and completely without camera. In a complex process, she scanned the wilting splendor of the flowers and in doing so created a special visual space that corresponds to her understanding of vanitas, the philosophical idea of the transience of everything mundane. Her images are first and foremost constant attempts to home in on the issue of the meaning of birth and decline, of life and death - not only in her still-life series Vanitas and Tulipa, but also in most of her landscapes and portraiture.