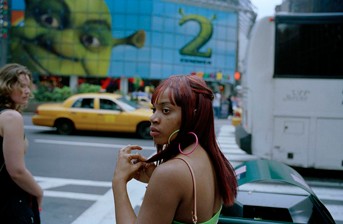 Rick Wester Fine Art is pleased to present Jeff Mermelstein's first one-person exhibition in New York in three years, Twirl / Run. Comprised of selections from two related projects, Twirl / Run further extends the artist's exploration of the streets of New York in all its random, chaotic organization. Mermelstein sees New York not from the comfort of an office or as a city of interiors, but rather as an organism of millions, all the parts of which intersect in a classic Rube Goldbergian contraption. The pictures shown illustrate two generic, ubiquitous, nearly involuntary gestures: mostly young women mindlessly twirling their hair as well as the denizens of this hyperactive city — mostly men — running in the street.

Mermelstein, a quintessential New Yorker, photographs his hometown and its quirky inhabitants with the eye of a dedicated uncle or an insightful sociologist, schooled in the universities of Garry Winogrand, André Kértész, Robert Frank and Joel Meyerowitz. The genesis of Twirl / Run is simple. It was borne from the periodic review and reorganization of the photographer's archive of images — a typical exercise for any prolific photographer. Scouring through thousands of negatives, Mermelstein began to see a pattern forming where unconsciously he had been photographing these two gestures for years, beginning in 1995. The power of these pictures, like a good film, is that once entrenched in them, it is impossible not to identify with the characters or see the world in any other way.