One Case Silent Photography Auction : Supporting the fight against breast cancer one case at a time - Emile H Dubuisson 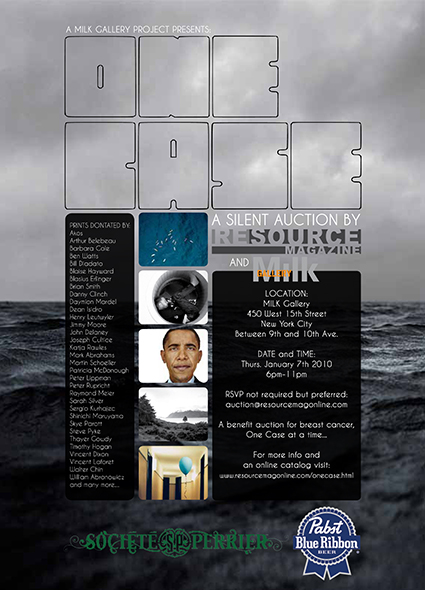 This coming Thursday, January 7 Resource Magazine and Milk Gallery are offering art lovers, artists, photographers, and humanitarians alike, all a chance to start off the New Year right by helping someone in need. At 6 PM at the Milk Gallery in Chelsea, NYC, the One Case Silent Photography Auction will be held to benefit a selected freelancer who is in dire need of medical funding, because she is without medical insurance and was recently diagnosed with breast cancer. According to the Susan G. Komen Foundation, based on current rates, more than 12.7% of women will be diagnosed with breast cancer at some point in their lives. Chances are that's 1 out of every 8 women you know. Breast cancer is the leading cancer among American women and is second only to lung cancer in cancer deaths. Statistically speaking, about 192,370 new cases of breast cancer will be diagnosed in American women in 2009 and about 1.3 million new cases of breast cancer were expected to occur among women worldwide in 2007 If caught prior to spreading beyond the breast, the five-year survival rate for breast cancer is now 98%. In 1982, a mere 25 years ago, it was only 74%. Thus, greater awareness leading to more early detection has significantly helped save lives. There are approximately 2.3 million breast cancer survivors living in the United States today, they make up the largest group of cancer survivors in the country. Thus, there is much to be said for creating awareness. Moreover, there is much to be said for helping someone get through financial stress and straits of treatment once diagnosed, especially a freelancer without coverage. According to a 2005 report put out by Freelancers Union, which used data from the Bureau of Labor Statistics, as well as the NYC self-employment statistics, unstable income and lack of health insurance were the two basic issues freelancers face that other regularly employed Americans do not. This has become a particularly critical issue in an economy where greater unemployment leads to more competition amongst freelancers, because less revenue means less money to cover the cost of health care. According to the 2005 report, 28% of freelancers simply live without any healthcare insurance at all. So, please come and help this coming Thursday. Over 30 photographers have already pitched in by donating prints for this important cause. One Case Silent Photography Auction 6:00PM Thursday, January 7th Milk Gallery, 450 W 15th, between 9th and 10th, NYC This event is sponsored by Resource Magazine, Milk Gallery, Perrier and Pabst Blue Ribbon (PBR) Beer.