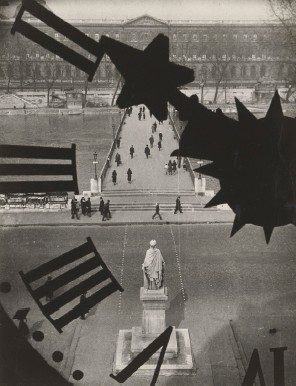 Twilight Visions: Surrealism, Photography, and Paris, a portrait of a city in transition as seen through the eyes of Brassaï, André Kertész, Ilse Bing, Man Ray, and others, will be on view at the International Center of Photography.
Organized by guest curator Therese Lichtenstein, Twilight Visions offers a unique insight into the impact of the Surrealist aesthetic on those photographers working in Paris in the 1920’s and ‘30s. Presenting over 150 photographs, magazines, films, and ephemera of the period, the exhibition highlights the visionary role that photographers played in both the avant-garde art world of Paris and in the rise of a new mass-media culture.

In the aftermath of World War I, Paris was a vibrant center of new technological and cultural developments as well as the home of thriving artistic movements. For the Surrealists and the photographers around them, the medium of photography provided an innovative tool that offered novel ways of presenting fresh perceptions of the world. A number of photographers turned their attention to the city itself, capturing essences of its seemingly ordinary yet colorful inhabitants, and of the places—such as dance halls and cafés—they frequented. The work of Brassaï, Kertész, Germaine Krull, and others was published not only in Surrealist periodicals such as La Révolution Surréaliste and Documents but also in popular illustrated weeklies such as Vu and Voilà. These eclectic images, often accompanying stories about science, culture, and everyday news, helped disseminate the Surrealist vision to a larger audience.

Twilight Visions refers to the dreamlike threshold between night and day that so fascinated the Surrealists. It also indicates the transitional state of Parisian culture during the 1920s and ‘30s. Narrow residential quarters were being replaced by vast boulevards, and instead of the 19th-century gas lights, the city was illuminated by the glare of electric light bulbs. As curator Lichtenstein points out in the exhibition catalogue, the Surrealist photographs and exhibitions of those years reveal an ambivalence toward modernity: while there is an excitement for the new, there is also nostalgia for the disappearing urban fabric of old Paris. Through a careful selection drawn from compelling well-known as well as less familiar images, Twilight Visions conveys the Surrealists’ melancholy in the face of their changing city and their frequently skeptical attitude toward the new opportunities afforded by modern life.

The exhibition will be comprised of five sections: dreamlike images of the city—its residents and environs—taken throughout the day and night; well-known public monuments photographed to cause the viewer to see them in new ways; the nostalgic influences of Eugène Atget on his Surrealist compatriots; the nightlife of Parisian avant-garde bohemians; and the distortion and transformation of the human figure, as a reflection of the Surrealist desire to alter consciousness and concepts of self and social identity.