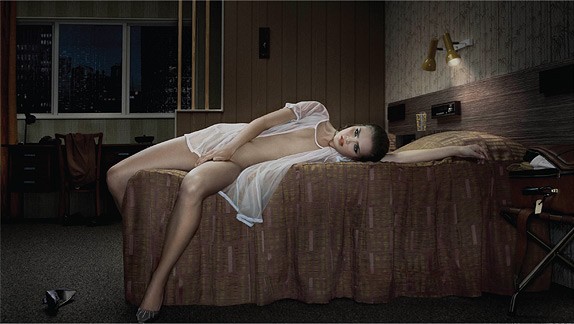 DAWN and DUSK reflect the maturity in Mr. Olaf's approach to making photographs and his consideration of form and content.

The genesis for this series came from artist's travels to the US, where he was struck by the interest of African Americans in an earlier body of work and his desire to expand his thinking about his subject matter. The artist found inspiration in the Museum of Modern Art (NY) collection, in "The Hamptons Album" made around 1900 by a female photographer, Frances B. Johnston, a remarkable photographic record of middle class Native and African-American students at a school in 19th Century Virginia.

He wanted to respond to and recreate the period atmosphere. DUSK is Olaf's first work in black and white in ten years. The artist describes the result as a "dark comic strip" for which he admits that he does not himself fully understand the content. DUSK was originally commissioned for "Dutch Seen: New York Rediscovered" at The Museum of The City of New York, by curator Kathy Ryan, longtime director of photography for The New York Times Magazine.

DAWN became Olaf's response to DUSK. This work, in color, is based on an encounter in Russia with people with pale skin in characterless rooms. The narrative content of DUSK is strong but not clear; the setting and the protagonists indicate some sort of personal, although enigmatic drama. DAWN inverts the dark tones of DUSK and plays them out into a cool, white field, with accents of light flesh tones. The artist describes DAWN as an aestheticized mirror and an exploration of form.


"Since working on RAIN, HOPE, and GRIEF, I'm not exactly sure what I want to talk about. I'm getting older. I have more doubt. I don't know where I will end up. I'm exploring. While I was shooting the DUSK series I still didn't know the answers. Now that I'm finishing DAWN I am finally realizing what I am saying. Not that I can say in words exactly what this is, but I know it. The best is when it remains a question mark."  Eyemazing: Issue 04-2009

Olaf's second body of work on view is HOTEL. The inspiration for HOTEL literally came from the artist's travels with the accompanying feelings of transience and anomie, the unsettled sense of passing through, the boredom with being on one's own. There is a distilled quality to the images, a suspension of time and action without any explicit drama. There is a sameness to the hotel room settings although each suggests a different city. HOTEL not only reflects Olaf's sensitive approach to his picture making but his virtuoso technique with its exquisite lighting and colors.

Mr. Olaf's career has soared since his last exhibition in New York with numerous solo exhibitions. In the past year alone, he has had major solo exhibitions at Institute Néerlandais, Paris; Domus Artium 2002 (DA2), Salamanca; Photo Museum Antwerp; The Grand Manege, Moscow Biennalle of Fashion and Photography; The Hague Museum of Photogra- phy; and Museum Forma, Milan. He has been included in shows at Kunsthalle Winterthur; MuHKA (Museum for Contemporary Art), Antwerp and Seoul Art Centre.

Other recent one-man shows include "Human All Too Human, at Fotograpifas Europea Reggio Emilia in Italy, "Still Living: Structure and Expression" at the South Eastern Center for Contemporary Art in Winston-Salem, NC, and "A Choreography of Emotions' curated by Jiří Ptáček at Langhans in Prague.

His 2007 Aperture monograph "Erwin Olaf" has just gone into its third printing. Commissioned works are included in the tour of the George Eastman House "Why Look at Animals" and in "Imitation of Life" at the MAMBO (Museum d'Arte Moderna Bologna) and "Short Stories in Contemporary Photography" at the Zurich Museum of Design. He is included in prestigious collections around the world ranging from the Stedelijk, Rijks, Ludwig and the Groninger Museums, the MEP (Maison Europeene de la Photographie) and FNAC to the Margulies Collection in Miami.