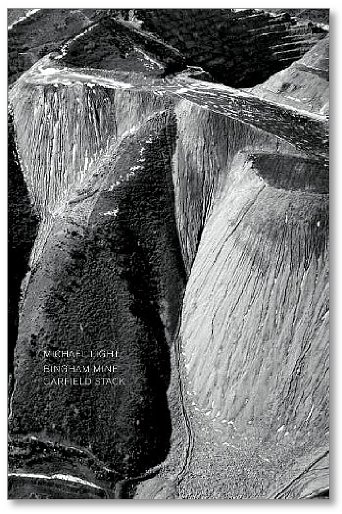 Located at 8,000 feet in the Oquirrh Mountains — 20 miles southwest of Salt Lake City —the Bingham Canyon copper mine is the largest man-made excavation on the planet. Its hole reaches more than half a mile deep and its rim is nearly three miles in width. It has produced more copper than any mine in history. The mine’s Garfield smelter stack, situated at the edge of the Great Salt Lake about 10 miles away, is the tallest free-standing structure west of the Mississippi River, and is only 35 feet shorter than the Empire State Building.

For the last several years, Michael Light has been photographing both settled and unsettled areas of the American West from small rented airplanes, including an amazing series of black and white images taken of the Bingham Mine and Garfield stack over the course of a single day. As with his other work, this series continues his interest in geology, mapping, vertigo, and human impact on the land, and is startling for both the amazing nature of the subject as well the sheer beauty of the images.

For the last several years, Light has been producing mammoth-scaled, very limited edition book-objects from his series of aerial photographs. These books have been widely exhibited to critical acclaim, and the series now extends to roughly eight such realizations, including books on Los Angeles (Day and Night), Phoenix, Sun City, Rancho San Pedro, and Mono Lake. This new publication is the first in a series from Radius Books that will translate Light’s impressive and ambitious projects into the trade book format.