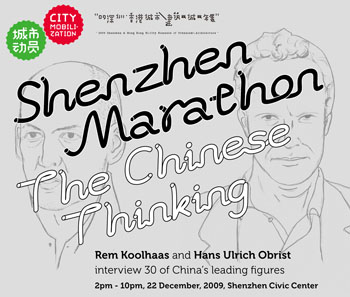 As part of 2009 Shenzhen & Hong Kong Bi-city Biennale of Urbanism \ Architecture, Rem Koolhaas and Hans Ulrich Obrist will host an INTERVIEW MARATHON at the Shenzhen Civic Centre on 22 December.

In an exhilarating and cerebral non-stop, eight-hour event, Koolhaas – the architect of the new Shenzhen Stock Exchange, under construction next to the Civic Centre – and Obrist – co-director of exhibitions and programs and director of international projects at London's Serpentine Gallery – will interview 30 of China's leading figures from the fields of media, economics, politics, planning, architecture, the arts, religion, science, and technology. The theme of this urgent dialogue is THE CHINESE THINKING.

What is the intellectual, creative, and political underpinning of China's burgeoning economy, its rapid urbanization, its architectural and artistic development, and its new power status in a bi-polar world? What are the costs, and the blindspots, of this rampant growth? And what is the special role played by Shenzhen as a laboratory for China's development?

Hans Ulrich Obrist invented the interview marathon concept in Stuttgart in 2005 as an experimental new kind of public event that bridges panel discussion, exhibition, and performance. In 2006 the concept evolved as Rem Koolhaas joined Obrist in interviewing over 70 people in a 24-hour marathon that took place in the Serpentine Gallery's summer pavilion, co-designed by Koolhaas and structural designer Cecil Balmond. The pavilion was one of an ongoing series of annual architecture commissions conceived by Serpentine director Julia Peyton-Jones. Obrist and Koolhaas now look forward to engaging the rapidly growing city of Shenzhen as a way into THE CHINESE THINKING.