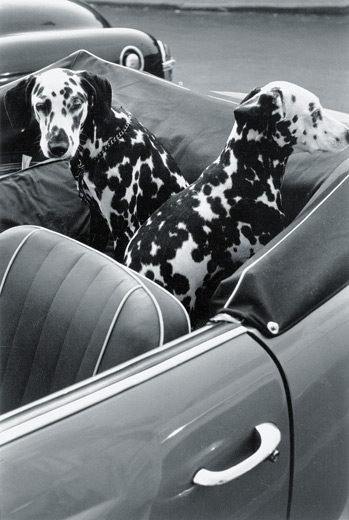 A man sits on a bench, arms wide spread and taking a sunbath, the panorama of Manhattan before him; two Dalmatians, elegant and dignified, on the backseat of a convertible; the Twin Towers of the World Trade Tower in morning haze and a lonely sea gull: many photographs by Louis Stettner have become icons. They are part of his long forays with his camera through entirely normal life. But he looks at the day-to-day in a different and particular way, he is ever ready for the fortuitous and the unusual encounter. He never stages his motifs, he composes them from the given moment and presses the button of his camera at the right second. In this way he discovers the flirting arms and legs of a sitting couple and makes out of a young sailor in a fast-food restaurant the casual emblem of a new time.

The photographer's love of Paris and New York can be perceived in every single image, for over sixty years he has photographed "his" cities and the changes in architecture and in culture, in classical black-and-white and in more recent work also in color. Born in the New York borough of Brooklyn, Stettner moved to Paris for the first time in 1946, inspired above all by the example of Brassai. After the long war years, where he served as soldier and photographer in the US Army, Stettner discovered in Paris the joys of daily life, the casual communication in cafés, the smells and sounds of the various districts and again and again the Seine, the life artery of the city with its quais and its quiet corners. A number of these atmospheric Paris impressions from early and later years will be included in the exhibition.
Since 1990 Louis Stettner lives again in Paris.

Between 1951 and 1990 New York was the epicenter of the photographer's life. In comparison to Paris, never stingy with beauty, for Stettner New York was like a "lady without make-up," appealing as well as atrocious. In "Steam from Manhole" it is not only the hissing cloud of steam arising from the underground, it also is the perpetual and once in a while pitiless throbbing of the metropolis. A heart beat which always accompanies the photographer when he makes his way and mixes with people. Ultimately it is the inhabitants of a city that give it its face and its soul. "Soul of New York" is the title Stettner gave to a photograph from the early 1950s of young black man: a deeply moving human image with gentle melancholy, an image that falls out of time as well as gives meaning to the moment.

Among the most well known of Louis Stettner's photographic works are those of "Penn Station" from 1958. An important part of New York daily life took place in that Manhattan train stain, torn down in 1963: the coming and going of commuters between city and suburb, between place of work and home. With fragmentary scenes, blurred forms and dancing lighting the photographer creates a magical place, where there is no pause and people become in the next moment memories. The photograph "Odd Man" but again gets at the heart of the matter of Stettner's art. A brief moment makes the man in the background a "remarkable man," an alien among hat wears and newspaper readers, and a crowded passenger car becomes a mystery. Just as the photography leaves open all possibilities of seeking and finding, so is their effect upon us. Their meaning is never fixed, we can allow the optical appeal, the beauty of a composition or a face to work upon us, or we can make contact.