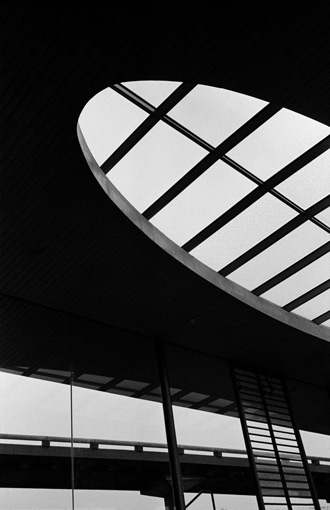 From October 16 until December 12, Hilaneh von Kories Gallery will present the exhibit "Urban Sketches" with black-and-white images by Loïc Bréard.

Loïc Bréard was born in Brittany, France, and now lives in Hamburg, Germany, where he evolved into a photo artist whose body of work is defined by a passion for the visual diversity of life. This diversity was displayed in his well-known series "El Rocio - a Spanish Pilgrimage", which became a book and was shown at Hilaneh von Kories Gallery in 2008. Human life, design ingenuity, architectural patterns - all of them come together in the Bréard vision of motives.

Architectural photography often exudes an extremely cool reserve, because architects like it that way. So photographers rarely leave a personal mark, and rather simply document the architect's work. Bréard's images, taken with a small format Leica camera and printed on silver gelatine baryt paper, are perfect compositions in their own right. They show a sense for dramatic points of view in the urban landscape, and feature small details, mass-produced components, façades.
Again and again, Breárd has been fascinated by reflections, resonating a classic subject of photography which has tried to capture shiny surfaces mirroring our environment. Metal surfaces and iridescent glass become subjective prisms, which remind us of a technique used by the masters of surrealistic photography -an elegant trait of craftsmanship, enhanced by exclusively using film and shooting only in black and white.

The medium of black and white photography, Bréard once said, is unique in allowing "to bring to light an existence behind the appearance and an emotion behind the human façade". And so he creates images with a sense of depth exuding from shadows and reflecting the philosophical and psychological core of life itself. In 1945, French film critic André Bazin wrote in his essay "The Ontology of the Photographic Image": "All art is based on the presence of people, only photography profits from their absence." Rarely has the absence of people produced such human images. Bréard, who studied painting and sculpturing at the École Nationale Supérieure des Arts Décoratifs in Paris, once said, he was able not only to see his pictures, but also to smell and to hear them. This is a rather unusual statement from a photographer.

What do those image tell us about life? You can try to ask them - during the exhibit in the Hilaneh von Kories Gallery in Hamburg.
Marc Peschke

The exhibit presents a selection of about 50 Silver gelatine prints on Baryte.