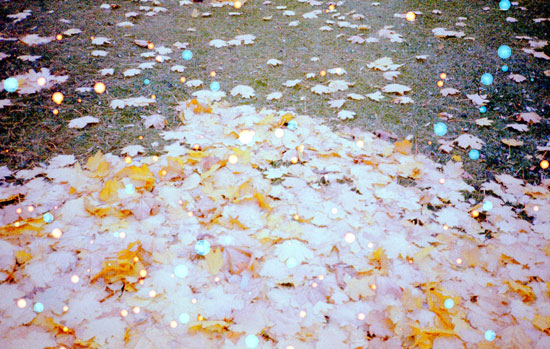 Neil Atherton’s “Speckled” pictures capture the blank reality of mundane places and objects, found in peripheral locations of big cities that are often overlooked, forgotten about or abandoned over time. These urban landscapes are the unseen backdrops to the drama of everyday life, without the drama.

“Speckled” is part of a larger series called "Expired" which employs different photographic formats (35mm, medium format, Polaroid, etc.) all of which are out-of-date.

The result is a combination of chemistry, chance, light and time - random splashes of colour that interrupt the relationship between the viewer and the subject. This spontaneity seems contrary to the perfection of modern digital photography, in which surface and texture are transparent, invisible even.  Indeed, no retouching or digital manipulation is used in the pictures.

The subject matter of “Speckled” is somewhat everyday and uninteresting, often documenting places and situations that belong to another era or are somehow stuck in time. The subject and its aesthetic representation are therefore both "expired."

As well as taking photographs, Neil Atherton curates exhibitions and organises the biennial Month of Photography fringe festival in Paris. He was born in the UK in 1975 and now lives in Paris, France.