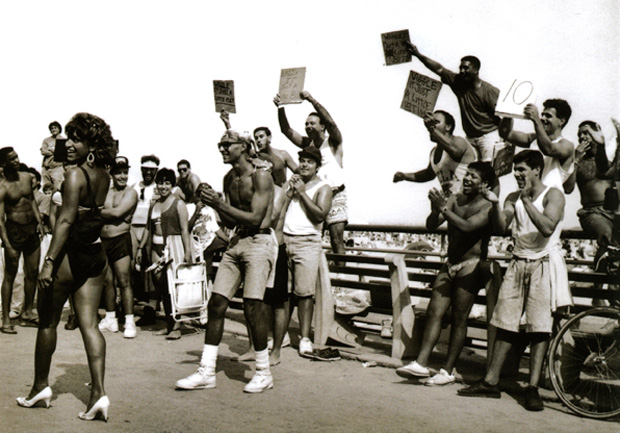 Having recently released her book of photography Street Level, September 16th will see the opening reception of her photography exhibit by “ONLY IN NEW YORK”. With a wealth of experience under her belt capturing the “pre-Giuliani” era of New York life, Kwon presents a variety of photographs of a time long-gone in her well-known black and white style. The show will run until October 4th at Clic Gallery.
ONLY IN NEW YORK compiles twenty years of SUE KWON’s acclaimed documentary photographs of New York’s neighborhoods and people. In the tradition of great urban photographers like Weegee, Helen Levitt, and Danny Lyon, Kwon’s riveting black and white images of New York’s pre-Giuliani street life, with its hustlers, players, dancers and shoe-shiners, are authentic and unsentimental. HILTON ALS of THE NEW YORKER writes, in his introduction to the upcoming monograph “STREET LEVEL”: “One can see Kwon’s empathetic involvement, her poetical surgeon’s eye, in the way she frames the streets, fashion, faces, and situations that make up her world. Again and again, she incites the viewer to look at [what] she has faithfully recorded in her personal, anarchic, and radiant photographs.”

SUE KWON began her career at THE VILLAGE VOICE, shooting subjects that ranged from runaways to underground Jamaican nightclubs in Queens. Her photographs have since been published in THE SOURCE, VIBE, and PAPER magazines, and she has become a well-known portrait photographer of hip hop stars, including NOTORIOUS B.I.G., the BEASTIE BOYS and the WU-TANG CLAN. Her work has been featured in group shows in New York and Copenhagen and been the subject of a solo show at A Bathing Ape Gallery in Tokyo. This is her first solo show in New York.