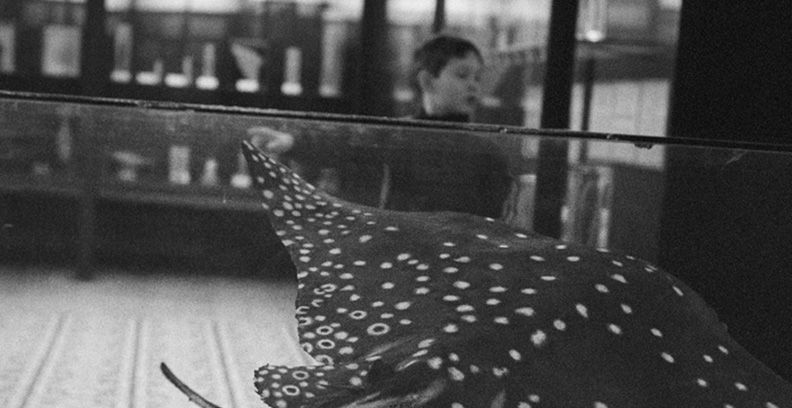 Olga Chernysheva’s work is distinguished by its attention to the psychological state of her subjects. As the artist explains, “There’s always a human figure in the frame,” the artist explains. ”The characters could be confined in a cramped interior, or they could be lost in a vast space, but they’re always on their own.” The Guards (2009) and The Cactus Seller (2009), a series of black-and-white photographs, offer portraits of such characters, figures isolated in a world of their own, alienated from their surroundings. Chernysheva focuses not so much on the figure, as on the atmosphere surrounding each subject, leading the viewer into the type of strange, meditativeenvironments seen in the early films of David Lynch.

Curator Boris Groys observes that while much of the contemporary art of the 20th century has fixated on integrating art into the everyday, Chernysheva uncovers the art in the quotidian. “Chernysheva has become increasingly interested in documenting the life of people whose jobs consists of doing nothing, e ice-fishers in winter, who sit motionlessly for hours on a frozen river, or security guards, whose only task is to watch intently while remaining completely still, fixed in one position. These ordinary people embody various modes of vita contemplativa, the contemplative life which findfeverish urban milieu.”

The theme of contemplation and mediation gains the added dimension of duration and repetition in Chernysheva’s video works. A special commission of the ARTiculate Contemporary Art Fund, L’intermittence du Coeur refers to Pavel Fedotov’s Encore, Encore!, widely recognized as one of the masterpieces of 19th century Russian painting. Chernysheva’s video offers more than a simple recreation or animated citation of Encore, Encore! The poodle’s erratic leaps lend the work a sense of arrhythmia, alternately interrupting and emphasizing the protagonist’s solitude.

Chernysheva counters this arrhythmia with the meditative gesture of the protagonist of Untitled, Dedicated to Sengai (2008). Standing outside a crowded metro, a serene young woman repeatedly draws Zen master Sengai’s symbol on an Etch-A- Sketch. When she holds out these sketches to passer-bys, she is not trying to sell the images; rather, she is advocating the contemplative bliss of the repeated gesture.

In the space of the Red Hall, Chernysheva’s meditations are heightened with the sense of nostalgia evoked by the factory architecture. Against the original tiled floors, her “Present Past” comes into contact with a past still very present, in the heart of the capital of what was once an empire.


Olga Chernysheva
Olga Chernysheva was born in Moscow in 1965. She studied at the Moscow Film Academy before enrolling in the Rijksacademie in Amsterdam in 1995. She has been created solo exhibitons for institutions including the State Russian Museum, St. Petersburg and the Moscow House of Photography, as well as galleries in Moscow, Amsterdam, London, New York, Brussels and Berlin.
Her work has been featured in exhibitions at the Solomon Guggenheim Museum, New York; Espace Louis Vuitton, Paris; Centro per l’arte contemporanea Luigi Pecc, Prato, Italy; Bass Museum of Art, Miami; Kiasma, Helsinki; and Hamburger Kunsthalle, Hamburg. She has participated in all three editions of the Moscow Biennale, as well as the Sydney Biennale, the Milano Triennale and the Moscow Photobiennale. Additionally, her project Second Life was shown in the Russian Pavillion at the 49th Venice Biennale. Last year Chernysheva was the subject of a special screening at the Museum of Modern Art in New York.

Boris Groys
Boris Groys is a philosopher, essayist, art critic, media theorist, and an internationally acclaimed expert on late-Soviet postmodern art and literature, as well as on the Russian avant-garde. In the 1970s, Groys, who had studied philosophy and mathematics at Leningrad State University, immersed himself in the unofficial cultural scene in Russia’s capitals, coining the term “Moscow Conceptualism.” In 1981, Groys emigrated to West Germany, where he earned his Ph.D. in Philosophy at the University of Müenster.
Since that time, Groys has published extensively on philosophy and art (his most recent book, Art and Power, was published by MIT Press in 2009.) Groys has also edited collections of articles in Russian and German and has written more than a hundred articles. Since 1994, in addition to serving as the curator and organizer of numerous international art exhibitions and conferences, Groys has served as the Professor of AestheticArt and Media Technology in Karlsruhe.

BAIBAKOV art projects
Founded by curator Maria Baibakova in 2008, BAIBAKOV art projects provides a progressive platform for cultural production within Moscow. The program places a firm emphasis on dialogue, actively engaging both a local and international audience through a series of exhibitions, lectures, performances, and publications intended to both further the public’s interest and understanding of contemporary art as well as to challenge previous conceptions about how this art can function within contemporary society. To this end, BAIBAKOV art projects welcomes creative collaboration with international artists, curators, and cultural institutions. Additionally, in keeping with Baibakova’s vision, the program is committed to the support and sustained development ofemerging art, pioneering a new model of patronage to promote experimental art practice in Moscow.
Director and chief curator, Maria Baibakova was born in Moscow and later studied art history at Barnard College, Columbia University, New York, and at the Courtauld Institute, London, where she obtained a distinction in her MA. She has gained invaluable experience working within multiple facets of the contemporary art world, from museums and galleries, to auction houses and advising. This experience informs her own independent practice as a curator, bringing an international insight to her work in Moscow.
As of December 2008, BAIBAKOV art projects operates out of the historic Red October Chocolate Factory, where it occupies more than 3,000 square meters on the third floor of the iconic red brick building. From this location, it is poised to become a central part of the nearby cultural hub, which includes the Pushkin Museum of Fine Arts, the Moscow House of Photography, the New Tretyakov Gallery and Art Center ArtStrelka.