Sally Mann - The Family and The Land 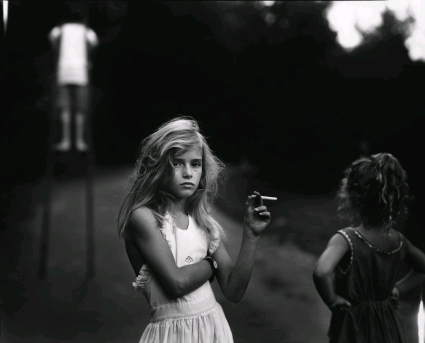 'Few photographers of any time or place have matched Sally Mann's steadiness of simple eyesight, her serene technical brilliance and the clearly communicated eloquence she derives from her subjects, human and otherwise – subjects observed with an ardor that is all but indistinguishable from love.'

Everything about the work of Sally Mann (b. Lexington, VA, US, 1951) breathes atmosphere, whether we are talking about the portraits of her growing children, her photographs of the natural world around her, or the death and transience she depicts in such a unique way. Her use of antique cameras and 19th-century photographic processes gives her work an almost tangible authenticity. Her unique view of the world, and the way she manages to capture it, have made her one of the most important photographers in the United States. This autumn, the Hague Museum of Photography is showing the five best-known series by this highly individual photographer, centred around her two great loves: The Family and The Land.

After graduating from college in 1974, Mann returned to her hometown of Lexington, Virginia, where she concentrated on photography. Her Immediate Family series (1984 / 1994) instantly brought her international fame. For ten years, she had photographed her children as they grew up on her farm in Virginia, following their development from childhood to adolescence, picturing them as they swam and played, and as their bodies changed. Conservative Christians objected to the way she had portrayed her children, but Mann herself saw nothing at all controversial in this series. It simply showed her growing children through the eyes of an inspired photographer and loving mother.

After photographing her children for ten years, Mann turned her lens on nature and the landscape of her home state Virginia for her 1993 / 1994 series Motherland: Virginia. For the series Deep South (1996 / 1998) she travelled to the southern states, where the history of the Civil War is omnipresent. ‘These pictures are about the rivers of blood, of tears, of sweat that Africans poured into the dark soil of their thankless new home,’ she wrote. Mann captured the historic landscape using a 19th-century camera and 19th-century developing techniques, including the wet plate collodion method. The photographs, which are characterised by light-stains and variations in focus, give the landscape an eerie feel that reveals the continued presence of its past.

In the series What Remains (2000 / 2004) Sally Mann shifted her focus from growing children, nature and the ever-present past, to death and transience. After a fugitive committed suicide on her property, she became fascinated by the eternal process whereby nature reclaims everything, returning it to its normal state. She dug up the remains of her pet greyhound to photograph what was left of her after 18 months in the ground. Her fascination with the theme led her to go one step further in recording this unstoppable process. In the garden of a forensic institute she photographed the bodies that had been placed among the trees, plants and bushes until they reached the right stage of decomposition for forensic study. The 2004 series Faces brings Mann full circle, and is the hopeful conclusion to What Remains. It is a series of portraits of her now adult children produced using the collodion method. In this series, again, the value of her antique techniques is clear, enabling her to produce images that are authentic in a way that could never be achieved using a computer. And that authenticity is the first thing one feels when looking at her work.