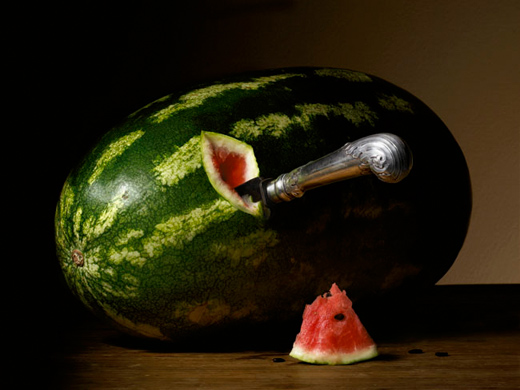 The products of much research, the works in this exhibition are made as echoes and resonances rather than programmatic illustrations of names, dates and events. Robyn Staceyâ€™s â€œEmpire Lineâ€ not only talks about role of desire in the transport of taste and knowledge systems, but also reveals once again the ongoing fascination with and strength of the still life tradition.
Craig Judd
2009 Empire Line catalogue essay

Stacey's transformation of these historic spaces and objects allows us not only to glance into earlier worlds but also to consider hierarchies of taste, culture and knowledge. Fontaine de Vaucluse for example, brimming with the fruit and vegetables that were originally grown in the grounds of Vaucluse House, is a fecund testament to the enthusiasms and efforts of its owner William Charles Wentworth. Details such as fallen petals on a tabletop or the sheen on a plate of freshly cut salmon give the images an immediacy that suggests the inhabitants of the house are not far away.

The First Cut (After Robert Spear Dunning), 2009, in which an ornate knife stabs the red flesh of a watermelon, undercuts the apparent innocence of historical still-life painting, specifically the fruit filled, warm and rustic works by American painter Robert Spear Dunning (1829 - 1905). While this photograph is set within Vaucluse House, the home of William Charles Wentworth who had a soft spot for watermelons, the loaded, sinister tone of the work is testament that Stacey goes beyond historically sound documentation to create imaginative and compelling works.