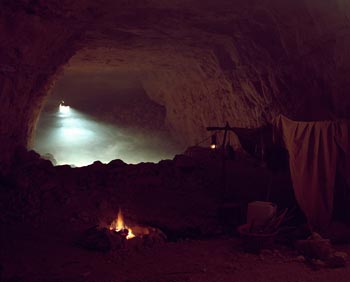 Lunds konsthall is pleased to present a selection of works by Omer Fast, an artist who is attracting ever more attention on the international scene. He was born 1972 in Jerusalem and educated in the US. He now lives in Berlin. This is his first solo exhibition in Scandinavia.

Omer Fast's art presupposes the skills and interests we have acquired as full-time dwellers in media landscapes. We intuitively grasp how the audiovisual information we must process to navigate the world keeps shifting between the modes of 'documentality' and 'fictionality'. What we do to make sense of the flow of footage in which we live today is not fundamentally different from what we have been doing for centuries to produce and consume stories of various kinds, from fairytales and chronicles to novels and newspaper articles.

Omer Fast's art comes alive through the intense poetic power he unleashes, first in himself as he is sculpting audiovisual material into work and then in us as we continue the work-in-progress of reading meaning into it.

One recurring feature in his works is the story that becomes ambiguously interlaced with another story. The very title of the work Spielberg's List underlines that a merger of narratives is going on. The interviewees recall incidents from the shooting of Schindler's List in Krakow in 1993, but some of them also lived through the events of 1943 that Spielberg's film fictionalises. In The Casting the American soldier's tales of an unintended killing on an Iraqi motorway and a driving accident in Bavaria have been literally cut into small shreds and then artfully patched together into one meandering story that incorporates both moments of crisis. Take a Deep Breath offers a seemingly more conventional coupling that winks at the aesthetic formula of the behind-the-scenes movie. The reconstructed memory of Martin F, a trained paramedic who was the first to arrive at the scene of a suicide bombing in Jerusalem, is juxtaposed with the situation comedy that unfolds when the film director Omer F is re-enacting it with his undisciplined crew.

Omer Fast also creates gaps or interstices where the specific informational and aesthetic value of image and text is subjected to doubt. This happens when he uses words and syllables (and sometimes mere grunts or inhalations) produced by TV news anchors as elements for configuring a new spoken text in CNN Concatenated.