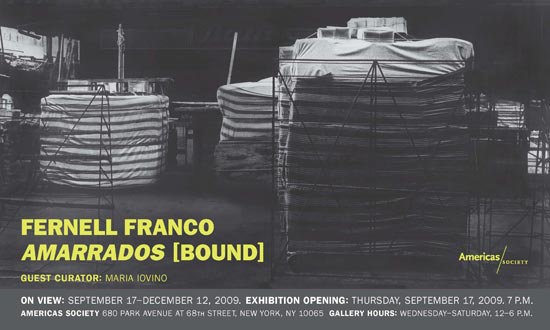 Americas Society opens on September 17th the exhibition Fernell Franco: Amarrados [Bound]; curated by the independent critic Maria Iovino, the show features seventeen large-scale black and white vintage prints as well as never before exhibited reference studies that demonstrate the many editing techniques Franco designed to favor the expression of a particular form in his photographs. The exhibition takes its title from the artist's series of the same name, featuring work developed between 1978 and 1994 in the streets and markets of Colombia, Ecuador, and Peru. Depicting isolated, bound and wrapped structures; the photographs are exceptional in their use of tone, shadow, and composition. The exhibition is the first U.S. solo museum show of Colombian photographer.

Fernell Franco (Colombian; b. Versalles 1942, d. Cali 2006), now understood to be one of the most significant contributors to contemporary Latin American photography, rose to prominence just a few months before his death. Born to parents displaced by political violence, the self-taught artist, guided by a passion for film and visual imagery, created his work in an environment dominated by perpetrators of armed conflict. Through a keen understanding of both the moving image and the language of editing, Franco achieved a powerful forum of expression: through fragmented discourse, he offered a revelatory look at the relationship between Latin America—its vibrant culture and fraught political landscape, its wars and socioeconomic disadvantages—and the rest of the world.

Guest curator Maria Iovino aims to introduce viewers in the United States to a photographer who blurred the boundaries between art and photojournalism, and whose work disseminated the use of the medium into contemporary artistic practices in Colombia. For Iovino, Franco "reveals an unedited aspect of the abrupt and violent processes in which modernity was developed in Latin American countries and the periphery."

This exhibition is organized in collaboration with the Fundación Fernell Franco, Colombia.

Delta Air Lines is the official airline sponsor for the Fernell Franco exhibition.

The Visual Arts program is supported, in part, with public funds from the New York City Department of Cultural Affairs.


All of our culture programs are free and open to the public. We are located at 680 Park Avenue at 68th Street in New York City. To arrive by public transportation, take the 6 train to 68th Street / Hunter College. For wheelchair access, kindly call in advance.

Americas Society members enjoy advance priority reservations and priority seating at our culture programs. To reserve your place at our culture events this season, please call the exclusive members-only reservation line at 212.277.8333, or e-mail membersres@americas-society.org.