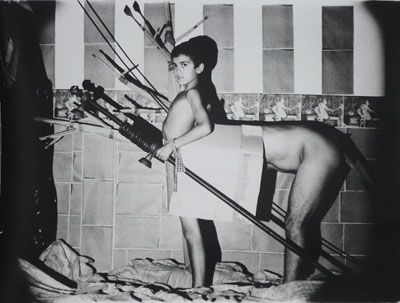 Tim Roda has something that many emerging artists don't - three boys under the age of 11 and a burgeoning marriage. And, because he has made them the content of his theatrically staged photographs for more than half a decade, Roda's work is also something of an anomaly. It deals with content we don't see much of in contemporary art - the familial. Rejecting the banality popular in contemporary photography, Roda features his wife and young boys throughout his black-and-white prints so that the relationships between father and son, wife and husband, mother and child are central to each composition.

But the Pennsylvania native uses more than his immediate family for inspiration. The reticently slanted domesticity we see in every one of the 35mm images combines make-believe memories from the artist's own childhood, as well as autobiographical moments from the present and shared histories from his extended family's past. The photographs are balancing acts between documentary and falsity; family portraits of multiple generations becoming complicit within Roda's own; documents of a family memorializing what was while also playing with what is. And, as such, Roda's art directly meddles in his life, while his life intervenes in his art.

A sense of yearning as paired with a dreamlike playfulness - evident in homemade costuming and exaggerated narratives - is consistent throughout Roda's oeuvre and makes each vignette a timeless, virtual reality that is part memory, part history, part real-time record of lives as they are unfolding.

No more is this better evidenced than in his latest body of work, which comes on the heels of a Fulbright Scholarship in Italy - and will debut this fall at Roda's galleries in New York City, Seattle and Berlin - where Roda investigated a foreign domesticity as well as his personal past. After some time in Rome, the family headed South to Pentidatillo, the village where Roda's grandfather grew up. Eager to explore his ancestor's existence as faithfully as possible, Roda blurred the lines between his art and his life more so than in any other series. The five Rodas settled into a one-bedroom house that served as both their home and Roda's studio. The resulting images look, therefore, like extracted splices of reallife moments because they were. The boys would be doing their homework or eating breakfast and they'd stop to work on one of Roda's sets.

Since Plato confined art to his cave, art and, for that matter, artists have struggled with art being second best to the "real" thing. Modernism achieved a self-referential autonomy where art could exist in an obscure, albeit ideal "Platonic" place, governed not by real life but by stylistic laws. Painting and sculpture were separate from the materialistic, mundane affairs of ordinary people. This was art for art's sake, and the complete opposite of Roda's paused performative reenactments of a life gone by and developing documents of a life going on. While the photographs have roots in the tradition of the family snapshot, Roda's work transcends. Though his works are an ever-evolving documentary of Roda's relationship to his past and his present they are most of all compelling investigations of both the passage of time and the dynamism of human relationships. Carrie E. A. Scott

Tim Roda (*1977 in Lancaster PA, USA) lives and works in New York surrounded by his family that represents, at the same time, his main artistic "material" and source of inspiration. He graduated whith excellence from the University of Washington. He took part to different residencies all around the world and received several awards, such as the Fullbright Award in 2008. Together with the exhibition in Berlin at Galerie Michael Janssen, Tim Roda is showing his new photographs at Daniel Cooney Fine Art Gallery in New York NY, and Greg Kucera Gallery in Seattle WA.