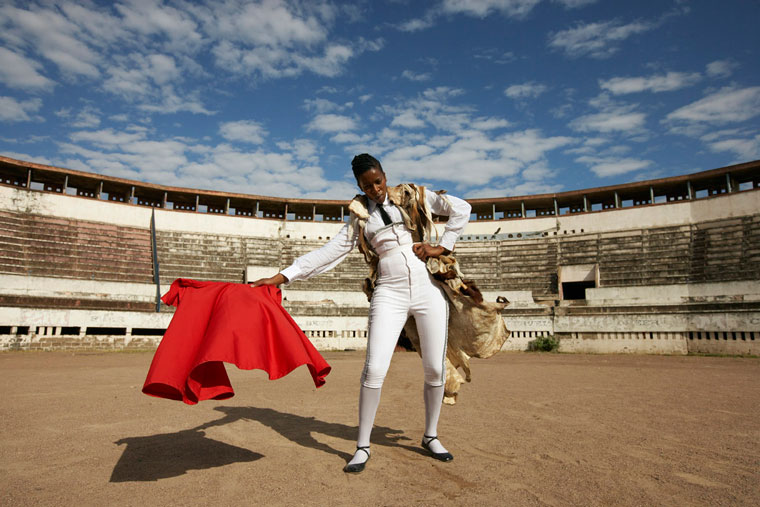 Central to this body of work is the concept of the boundary, particularly as something that constantly shifts and mutates, that is never fixed or static. The boundary between corporeal awareness and revulsion is explored through the artist’s use of raw cowhides, tails and ears, which are cured and sculpted. In Penis Vagina – One-Man Capsule (2009), the boundary between the need to fight and the need for protection is also apparent. Like Mntambo’s earlier piece uMcedo (2009), this work offers a space that one may enter for protection and perhaps preparation, only to emerge when one is ready. The sculpture is both penetrative and encapsulating, an evocative hermaphroditic form that speaks of pure potential.

The artist’s interest in the dynamic tension that exists within the self, the push-pull between libido and mortido, life instinct and death drive, also appears in her photographic images. In The Rape of Europa, a reinterpretation of a Picasso sketch of the Minotaur caressing a girl, the artist occupies both roles, and in her recreation of Caravaggio's painting of Narcissus gazing at his own reflection in a pond, she replaces Narcissus with herself as Zeus in bull form. In the bronze head-and-shoulders bust in the Renaissance tradition, she combines her own feminine features with those of Zeus disguised as a bull.

In another new sculpture, Waiting (2009), a cowhide figure disappears into a wall. It is unclear whether the figure is waiting for salvation, or seeking a hiding place from an unknown terror. While the exposed rear of the prostrate form is undoubtedly a gesture of submission, there is also a sensuality and beauty to the figure, imbuing it with an undeniable sense of agency.

The artist’s first foray into performance is to be seen in her video Ukungenisa and related prints, in which she rehearses the steps of a bullfighter in the abandoned Praça de Touros in Maputo, the arena where black Mozambicans once fought for the entertainment of the colonial Portuguese. This attempt to take on the persona of the bullfighter represents a shift for Mntambo, whose previous work effectively invited the viewer to take her place, to step into the outline of her body as defined by the moulded cowhide.

Born in Swaziland in 1982, Nandipha Mntambo graduated with a Masters in Fine Art (with distinction) from the Michaelis School of Fine Art, University of Cape Town, in June 2007. In 2005 she was the recipient of the Brett Kebble Art Awards Curatorial Fellowship, and in 2006 she was one of five young artists selected for the MTN New Contemporaries exhibition curated by Khwezi Gule at Johannesburg Art Gallery. Recent group exhibitions include Beauty and Pleasure in South African Contemporary Art at the Stenersen Museum, Oslo (2009); .za: giovane arte dal Sudafrica, Palazzo delle Papesse, Siena (2008); Apartheid: The South African Mirror at the Centre de Cultura Contemporania de Barcelona (2008); and Olvida Quien Soy - Erase me from who I am at the Centro Atlantico de Arte Moderno in Las Palmas (2007).