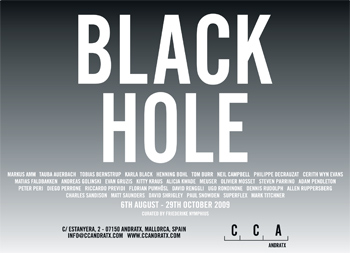 BLACK HOLE is an international group show ideated especially for Kunsthalle Andratx. The show features painting, sculpture, video, film, installation, photography by about 20 international contemporary artists. The artists' works are multidimensional and multilayered, what they share are the references in their exploration of theme. Their subversive, incisive and sensitive commentaries on the subject create a varied imagery.

A black hole defines a surface in spacetime that marks a point of no return. Once an object has crossed this surface there is no way that it can return to the other side.

Every period in art reflects the prevailing sense of the human condition. The exhibition BLACK HOLE represents the current sense of cultural dysphoria, a state of dissatisfaction and anxiety, remembering images and feelings of the 80's. Art presents itself fragile just as the construction of our life. In consequence forms are ruptured and deteriorating. The show reflects an existential search for truth that is never complete but a fragmented, complicated, multi-sided, not absolute one that at the same time proves to be full of unknown escapes and possibilities.

In response to a moment marked by existential threads, the artists in this exhibition create works in which the political or social is addressed indirectly through metaphoric or poetic approaches and subtle contextual displacements thus turning the subject into an existential questioning. Borrowing visual idioms from the realms of advertising or the media, these artists locate tangential points of protest that are slyly complicit with the terms of capitalism they often seek to undermine. At the same time, they investigate romanticized notions of outlaw culture and underground movements.

BLACK HOLE presents contemporary artistic positions that melt the monochrome atmosphere of our post-industrial times with their visions of the present. The art works in the exhibition mix a formal language that is reduced to the elementary with a strong consciousness for the presence thus creating a specific aesthetics.