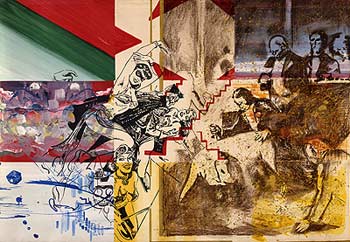 From Clique to Pop to Politics, the three successive parts of the exhibition Sigmar Polke. Wir Kleinbürger! Zeitgenossen und Zeitgenossinnen (We petty bourgeois! Contemporaries) have a joint focus: Polke's 10-part series of works on paper entitled Wir Kleinbürger – Zeitgenossen und Zeitgenossinnen. Created between 1972 and 1976, it is largely unknown to the public and its presentation for the first time in over 30 years at the Hamburger Kunsthalle provides an unprecedented opportunity for viewers to engage with this striking body of work. The second part of the exhibition – Pop – looks at artistic explorations of pop cultural themes and images, and also features Polke's highly unusual series Original + Fälschung (Original + Forgery). As in the first part the paintings and drawings on show are supplemented by films, photographs, and stencils backed up by documentary material and source images, all of which serve to illustrate the diversity of Polke's work across a range of media.

Both Wir Kleinbürger – Zeitgenossen und Zeitgenossinnen and Original + Fälschung were produced in the period when Polke was living on a farm in the Lower Rhine region. The exhibition in Hamburg provides a unique opportunity to view these two bodies of work in a joint presentation: the juxtaposition of the series emphasizes Polke's pioneering role as a figurative painter and his influence upon the anarchic actions of younger generations of artists. In contrast to American Pop art, which by then was long since canonized, the images from everyday life in the work of Polke and his fellow artists were frequently interspersed with references to international countercultures, underground currents and political activism.

The Kleinbürger series marks a turning point in Polke's oeuvre: whereas his work from the 1960s offered ironic visual commentaries on the reality of life at the time of the 'economic miracle', here he begins to challenge social norms. He presents a panoramic view of West Germany in the 1970s, a period marked by the hippie culture, the nascent women's movement and terrorism. Individual and collective dreams and fears are critically addressed, satirized and called into question with a considerable degree of wry humour. Various ways of escaping from bourgeois surroundings are investigated – whether on a small or large scale, by way of consumerism, exoticism, sex or drug use – and possible alternatives to bourgeois existence are explored in images that switch between male fantasy and feminism, peaceful protest and armed resistance.

The presentation at the Hamburger Kunsthalle recaptures for the first time the 'anti-museum' spirit of its first showing in 1973, created for the Kunstverein Münster. In a large-scale installation featuring hundreds of mirrors and coloured neon tubes, Original + Fälschung once again combines a complex critical reflection upon images and authenticity with the glamorous culture of clubs such as the legendary Creamcheese discotheque in Düsseldorf. By directly addressing topics such as art theft and forgery as well as mythic notions of artistic authorship and authenticity, Original + Fälschung exposes the mechanisms of the art market and challenges the ideals embodied in the bourgeois conception of art.

Over the course of the exhibition, more than 100 individual works and series drawn from international museums and private collections will be shown, revealing complex methods of appropriating, copying, sampling and reinterpreting visual material. Innocent-looking visual galaxies are transformed into nightmarish scenarios filled with dark comic figures and grotesque, ghostly apparitions. Here, the garish world of Pop comes face to face with its morbid counterpart, an encounter that is emphasized by the deliberate pairing of specific works. This is the first time since they were made that some of these images are being shown in the form originally intended by Polke.

Supported by the Michael & Susanne Liebelt-Stiftung