Robert Bergman A Kind of Rapture 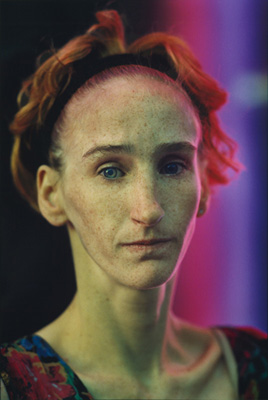 From 1985 through 1997, Robert Bergman traveled America's Midwest and East Coast by car with a 35mm format camera, taking portraits of people he met by chance.  After spending a brief time with each subject, Bergman created portraits of people in the urban locations where he encountered them, using only available light.  The exhibition will include approximately seventeen 37" x 24.6" digital C-prints.  Mr. Bergman has taken photographs for over 40 years; however, this year marks the premiere exhibitions of his work.  Art historian Meyer Schapiro wrote of Mr. Bergman's photographs, "His finest works bring to mind some of the greatest painted portraits...The authenticity of Bergman's art appears in the 'hypnotic' impact of faces that have attracted him as bearers of an unfathomable human presence, a self and a human condition.  Here are masterful revelations of states of existence in the inner and outer person - truly profound works of art."

The gallery's exhibition will coincide with the artist's two debut solo exhibitions at the National Gallery of Art, Washington, D.C., and at P.S.1 Contemporary Art Center, New York.  Mr. Bergman's book, A Kind of Rapture, was published in 1998 by Pantheon and contains essays by Nobel Prize and Pulitzer Prize recipient Toni Morrison and renowned art historian Meyer Schapiro.  Robert Bergman was born in 1944 in New Orleans.  He currently divides his time between Minnesota and New York.