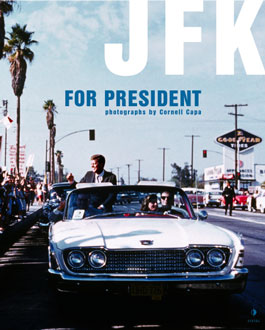 Cornell Capa began the 1960 campaign season as a stalwart Adlai Stevenson supporter, having closely covered Stevenson's 1952 and 1956 presidential bids for Life magazine. Then, during the Wisconsin Primary, while working on a story for Life magazine on the nature of American politics, Capa encountered John F. Kennedy. The two men immediately gained mutual respect for each other, and, after Kennedy secured his party's nomination at the Democratic National Convention, Capa decided to cover his campaign for Life. When Kennedy was elected, Capa was inspired to create a book on the first 100 days of his presidency. Capa enlisted nine fellow Magnum photographers in his effort, including Henri Cartier-Bresson, Elliot Erwitt, and Burt Glinn. That book, titled Let Us Begin: The First 100 Days of the Kennedy Administration, was published on the 110th day, and is often cited as the first example of “instant history.” Drawn from the collection of New York's International Center of Photography, the photographer's archives, and the Time-Life Picture Collection, the exhibition JFK for President includes both vintage and new prints, including rarely seen color images. Cornell Capa was born in Budapest in 1918 and has lived in New York since 1937. He was a photographer on the staff of Life magazine from 1946 until May 1954, when his brother, Robert Capa, was killed by a landmine in Indochina. Cornell then joined Magnum Photos, the agency that his brother co-founded. During his Magnum years, Capa traveled to the Soviet Union and covered the Israeli Six-Day War, but his most extensive projects focused on politicians from Adlai Stevenson to Barry Goldwater. In 1974 he founded the International Center of Photography in New York, and served as its director for 20 years. Since his retirement in 1994, he has worked on numerous books and exhibitions, and he remains one of the photographic community's most respected elder statesmen.