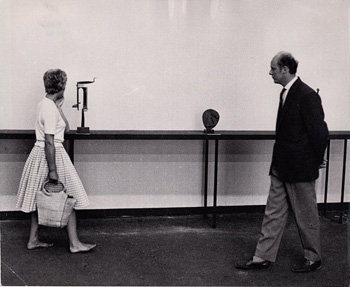 The d documenta is a two-day conference which has the goal to provide a forum of discussion and reflection on the history of documenta, its various incarnations and its future.

documenta has come to represent a key periodic moment when contemporary art is exhibited and those who are interested in art as well as in its relation to the world meet, assess the situation and share their views. For those involved in organising the next documenta, the journey publicly begins on September 18th, 2009.

The speakers invited to this event are the artistic directors of all the preceding editions of documenta. Each former director has been asked to make a presentation about their documenta by first describing the sense of the present they felt at the time of the project they organised: How did they feel present to their time, what did that mean and how did that inform the strategies they employed, the decisions they took? Second, they have been asked to outline, in retrospect, what they might have done differently - in light of what happened in the world of art and in the world at large subsequent to their documenta.

The Castello di Rivoli and documenta 13 are grateful that all the former directors, as representatives of the artists and the curatorial teams who together conceived, imagined, witnessed and dreamed documenta, have accepted the invitation and will reflect upon their ideas and experiences.

When documenta was conceived in the early 1950s, it was a direct response to the "degenerate art" politics of the Third Reich. Therefore, contrary to other periodic international exhibitions which have emerged from the world fair models of the 19th century, it is characterised by a theoretical grounding and a sense of the urgency of art in society. Today no less than 50 years ago.

The choice of Castello di Rivoli Museo d'Arte Contemporanea, as the ideal location for this conference, is due to the particular circumstance that the museum's first director, Rudi Fuchs, was also Artistic Director of documenta 7 in 1982, and that today, Carolyn Christov-Bakargiev, Chief Curator since 2001 and interim artistic director of the Castello di Rivoli in 2009, has been nominated the Artistic Director of documenta 13, which will be held in 2012 in Kassel. "documenta 13 - says Christov-Bakargiev - is being developed from an archeological perspective, according to which every cultural project that moves forward must be grounded on a backwards gaze, in an ecological relationship to the past. How was the present imagined in the second half of the 20th century and what was considered urgent at each successive edition of the exhibition?" At the same time, she is "…personally committed to the illogical, the playful and the poetic, to the celebration of works of art, as well as to the participation and singular experience of those who attend an event like documenta".

This conference attempts to bring the past, present, and future of documenta into one room, in dialogue, and we invite those who are interested to join us.