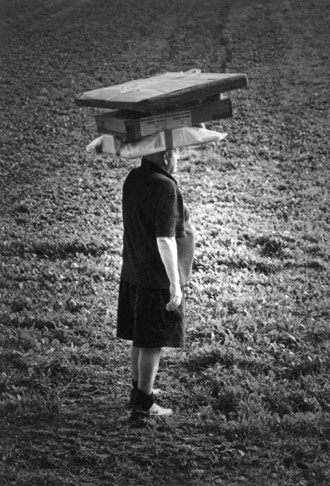 As of July 4th 2009, Merano arte will be holding a one-man show devoted to Urs Lüthi. Curated by Valerio Dehò, it will be a special kind of retrospective following the artist's wishes.
The exhibition draws on a fruitful collaboration with the Kunstmuseum, Lucerne and the Lelong Gallery of Zurich. It will also be held at the Villa Giulia, Verbania from 31st October 2009 to 10th January 2010, and in 2010 it will travel on to the Brodbeck Foundation in Catania.
A catalogue of the show will document the artist's output, with texts by Christoph Lichtin, Valerio Dehó and Rainer Michael Mason. It is published by Edizioni Periferia, Lucerne (ISBN 978-3-907474-51-8).

A mainstay of European conceptual art, Urs Lüthi embarked on his artistic career in 1966 at the age of 19. By 1970 he had begun using photography in an extremely ambiguous way. In subject matter he built on self-portraiture with a penchant for pronounced chiaroscuro, as in the Renaissance tradition, while his own sexual ambivalence came through loud and strong. I'll be your mirror dates from 1972: it was not just a youthful point of arrival in the artist's sexual indeterminacy, but an explicit statement involving the public.

Lüthi's art has always been subtly provocative: keen irony and self-irony go with an extraordinarily disciplined search for absolute form. In a series of physiological transformations he has raised his own life story, ego and body into a single consistent work of art. Whatever the technique he uses (photography, painting, sculpture, performance, multiples and editions), he has stuck to a clear line where his own existential odyssey becomes an aesthetic experience. Often his oeuvre falls into diptychs and triptychs reflecting a personal need to give intelligible form to his quest for expression in relation to art history. Relations in his output are constantly prone to variation and combination. Eros and Thanatos, being and non-being, pleasure principle and reality principle, male and female - Lüthi's pairs of opposites never come full close. His is a Mise en abime that repeats all, reproducing an opposition that knows no dénouement, no happy synthesis whether partial or temporary.

In Lüthi's case it would be facile and wrong to identify art with life. They run parallel, without overlapping. As he himself states: "Art is anything, anything is art, art is life, life is art. That would be the most fatal line of reasoning. And that, I think, is how Beuys came to be misunderstood. When he argued that everyone has artistic potential, he did not mean they had the slightest artistic worth. Beuys himself was a rigorous sculptor in the classical mould. If one takes oneself and one's life as a starting point for one's work, that by no means implies that art and life are identical. In the end they are two quite different worlds".

Merano arte will be presenting the full series entitled Trademarks dating from 2006, in which the artist goes back over his entire output, an edition of 143 works forming a Summa of the oeuvre to date. In practice he has revisited them all and collected them in a precious wooden casket like Marcel Duchamp's Green box. Trademarks is a complete retrospective of the artist conforming to his own wishes, voicing his own ideas, his own thinking as a poet and artist.

In addition there will be 10 bronze sculptures on display from the series Human space in which the artists sets his body, posed in fitness exercises, against a range of basic architectural forms. Once again the human body, his body, is linked to the forms in which culture clothes space and the habitat. Lüthi's is a highly personal brand of humanism, with a clear intent to connect to the great classical tradition: ironically, intelligently.
The exhibition is completed by a large photo called Water, from the cycle The remains of clarity, where once again Water - the symbol of life, movement, transparency - becomes an icon for the scope and form of existence.