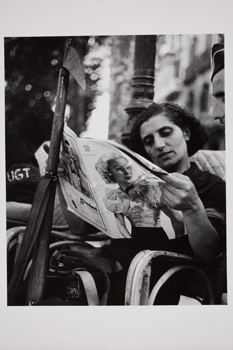 The precocious Budapest teenager who would eventually become known to the world as Robert Capa did not aspire to be a photographer. He wanted to be a writer – a reporter and a novelist." (Richard Whelan) Capa's evolution into a press photographer and war reporter (all the while entertaining the idea of filmmaking) was fundamentally determined by history, as well as by factors like the accelerated technical developments in photography, the changes in the printed picture press in the 1920s as a result of the influence of motion pictures, as well as the increasingly refined techniques and strategies of photographers.

Capa distinguished himself among the ranks of war reporters who thought, – with the visual appearance of magazine pages already in mind –, in series of images that rolled like film footage, and who had the courage and the ability to "get in close" and show aspects of war and fighting on the front lines in a form that had hitherto been impossible, partly due to technological limitations and partly because of the restrictions of censorship.

Capa worked for a number of US and European agencies; his photo reports appeared in the columns of such publications as Vu, Regards, Ce Soir, Life, Picture Post, Collier's and Illustrated. At the same time, in addition to his work as a photo correspondent, being one of the founders of the Magnum photo agency (1947), educating and supporting young photographers were of primary importance to him.

Following his death in 1954, his brother Cornell Capa, in addition to his own work as press photographer, strove to preserve and introduce to the world the oeuvre of his brother and his colleagues. As a first step, he expanded the International Fund for Concerned Photography, which he had co-founded with others in 1956. Then, in 1974, he established the International Center of Photography (ICP) –, one of the world's most prominent institutions of photography, simultaneously a museum, a school and an archive – with himself as director.


Between 1990 and 1992, Cornell Capa and Richard Whelan looked through Capa's more than seventy thousand photos and chose 937 of them, the most outstanding photos of his oeuvre from 1932 to 1954, to represent the cornerstones of his life's work and his career as a press photographer.

In 1995, from the 937 negatives that had been selected, three identical, excellent quality series were produced using traditional photographic technique. These consisted of 40x50 cm enlargements and marked with Robert Capa's embossed seal. It was determined that no additional series could be made after this time. Of the three series, one remained in New York, the second one found a home in the Fuji Art Museum of Tokyo, and the third set was purchased by the Hungarian Ministry of Culture and added to the Historical Photo Collection of the Hungarian National Museum.

Besides the 937 photographs that constitute what is known as the "Definitive Collection", the Hungarian National Museum also acquired 48 original Robert Capa vintage copies dating back to the same time.

The backbone of the exhibition consists of selected groups of photographs. The more than 200 images lead viewers through the key stages of Robert Capa's carrier as war correspondent through highlighted themes of his oeuvre, in chronological order.

The exhibition starts off with Budapest – presenting family photos, portraits and other documents – and moves on to the first serious commission in Berlin (the series on the speech given by the exiled Lev Trotsky in 1932, in Copenhagen) and the difficulties of the Paris years. Then we arrive to the most definitive stage in the oeuvre, the three-year period (1936–1939) spent photographing the Spanish Civil War and the Second Sino-Japanese War, during which Endre Friedmann / André Friedmann became Robert Capa, one of the most famous war press photographers in the world. Next we see the seats of world war operations: photos capturing the North African, Southern Italian and Sicilian fronts as well as the Normandy Landing on June 6, 1944. The "D-Day" series, which also served as inspiration to film director Steven Spielberg, is followed by images documenting the denigration of the French women who collaborated with the Germans and the liberation of Paris. The sequence of wartime photographs ends with images of the Ardennes Offensive and the advances of the Allied Forces. Capa's post-world war work is represented by his reports on the establishment of the State of Israel and the associated conflicts, the immigrants and the refugees, as well as the material from his journey to the Soviet Union with John Steinbeck in 1947 and the photos of his 1948–1949 trip around Eastern Europe, which also include some Budapest shots. The chronological sequence ends with Capa's photographs of Indochina and the photos taken on May 25, 1954, immediately preceding his death.

A separate section is devoted to the photographic documents of his social life, which became inextricably intertwined with his work as press photographer. His portraits which were taken in parallel with his war reports capture people that were important to him – colleagues, friends and lovers – as well as many prominent figures of the era, including Pablo Picasso, Ingrid Bergman, John Steinbeck and Ernest Hemingway.

The exhibition was organized by the Hungarian National Museum, Budapest