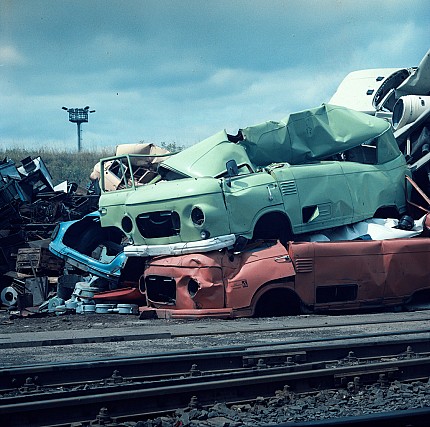 Nobody has photographed everyday-life in the DDR quite as unvarnished as him. Martens mastered Street Photography of the East at a time when he couldn’t have even known the term existed Olaf Martens does what one is not supposed to.“  Hans Eberhard Hess Photo International

Gallery f5.6, Munich, is very proud to present for the first time ever, Olaf Martens DDR (Deutsche Demokratische Republik) works from 1979-1989. This represents the 10-year time span prior to unification of the two German states. In the last months Olaf Martens has been going through his archive for the first time in 20 years. The result is an extensive but very personal view of the DDR, not seen before.  At the same time these early works shed a completely new light on - and root his more well known later and recent staged works in a very different manner.

Olaf Martens was a member of the so-called Thomas Mann Club in Nordhausen before attending East Germany’s elite art school, the Hochschule für Graphik und Buchkunst in Leipzig, from 1985-1992.  His fellow students at this time were Rosa Loy, Neo Rauch, Matthias Hoch or Hans Christian Schink to name but a few. It is important to contextualise how art and in particular photography was practised in the DDR. In the West, due to complete freedom of press, art and image culture was a completely normal part of every-day life. In the East, however, images could only exist within the boundaries of total state control. Contemporary art and media culture from the west were hardly to be seen in Eastern Germany.  Within photography, landscape and portraits were allowed. Reportage and documentary photography, under the heading of socially engaged photography, was also encouraged and interestingly, nude photography was not taboo. In all these categories, one could of course only photograph what the state wanted to have depicted. Olaf Martens photographed in all of the encouraged categories and always carefully extended over the allowed boundaries pursuing his personal vision. He obsessively photographed street and architectural city scenes, landscapes, children, teenagers, parties of all kinds, old people in their surroundings, friends and family and shop windows. Like Ed van der Elsken, Diane Arbus or Lee Friedlander, Olaf Marten’s work is never just part of the documentary tradition, they always are ironic and play with the absurdity of human existence, especially when living in a totalitarian state, where this very easily becomes one of the only forms of expression, in order to criticise. Early on in his career Martens looked for private locations to experiment with his pictorial ideas that were not possible with his daily photographic hunt on the street. By using nude photography, which was allowed, Martens used this category, kind of like a walking stick. He started meshing this more and more with all other categories that were allowed. His pictorial language ever more clearly started pointing to ruptures and his personal situation of having to work within a totalitarian state, yet always within the given boundaries. Whenever he crossed the border – the Volkspolizei would suddenly appear out of nowhere and confiscate his films. The STASI (Staatssicherheit - East Germany’s organised control arm) was thus a steady presence in Olaf Marten’s life. Often they are also part of his images, whether by accident or deliberately. In an image of a gathering of youths in Nordhausen in 1983 two men stick out of the masses of young people like two sore thumbs – two STASI associates.

Olaf Martens only now, almost 20 years later, felt able to go back through his archive of his early career. Together we have selected over 70 images to show Marten’s personal picture of the DDR and also to gain a deeper insight into the roots of his work today.  Olaf Martens has always been unique - overflowing with humour, energy and above all endless creativity.

Olaf Martens was quickly celebrated in the early nineties as one of the upcoming East German photographers with publications in Stern, FAZ Magazine and so forth. Today his work is found more within the International art world. Since the end of the nineties his work has been shown in numerous solo and group shows like the Leopold Museum Wien, Grassi Museum, Leipzig, Kunstmuseum Bonn, Kunstforum Halle, Fotomuseum Wintherthur, Deichtorhallen, Hamburg. Please contact Florence Baur at presse@f56.net for more information and images.