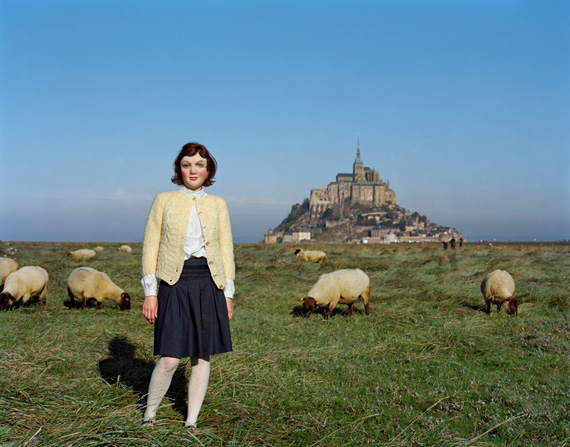 Within today's predominantly visual culture, photography has been a powerful vehicle that contemporary artists have used to examine notions of identity and conflicts of self-perception. This June, Michael Hoppen Contemporary is delighted to announce an exploration of these themes by Ofer Wolberger in his collaborative project (Life with) Maggie.

Maggie - always portrayed by Wolberger's fiancée Billie Martineau - is a fictional character who seems transported from another time and place, a world seemingly set in the past, yet imbued with distinctly modern concerns. Maggie has a peculiar and compelling style. She travels around the contemporary world, but is attracted to sites with a slippery sense of time. Throughout her journey, Maggie collects memorable snapshots for her archive, in a sense constructing an identity through the photographs. At a time when so many people are obsessed with constructing online identities through social networks like MySpace and Facebook, Maggie is out in the physical world attempting to understand how and where she fits in. The photographs reflect on notions of the individual in society, as well as the strange culture of tourists and their pervasiveness in our everyday lives.

While Maggie in some ways manages to blend in with her photographic surroundings, her mysterious features and oddly outdated style draw our attention more acutely to her individuality. Maggie appears confident yet vulnerable as she determinedly confronts the camera, and as a consequence, her own projected image. In one sense, the displacement of time and place within the context of tourism characterizes Maggie as an outsider. Seen from another perspective, Maggie's desire to travel is an attempt to connect with people and places around the world.

Wolberger met Martineau via an online social networking site, where for six months they became long distance friends (she in a small city in the Loire Valley, and he in NYC). They shared a common love of old films, indie music, photography, and painting and began an active dialogue not only via the internet but also by sending one another packages of cd's, images and ephemera. When they finally met, the relationship became romantic and there began an incredibly productive and rewarding partnership. They now live and work together in New York City.

Wolberger has an MFA from School of Visual Arts in NYC and studied variously with Joel Sternfeld, Collier Schorr, Vera Lutter and William Christenberry. He is the recipient of The Humble Arts Foundation's Spring 2008 Grant for Emerging Photographers. His photographs have been exhibited around the world, most recently in Tim Barber's Various Photographs as part of the New York Photo Festival and in Young Curators, New Ideas at Bond Street Gallery in Brooklyn, and has been chosen as one of four artists to take part in the 2009 Talents exhibition at the C/O gallery in Berlin - a prestigious experimental forum for young international contemporary photographers and critics. He was also nominated for the BMW Prize at Paris Photo 2008.