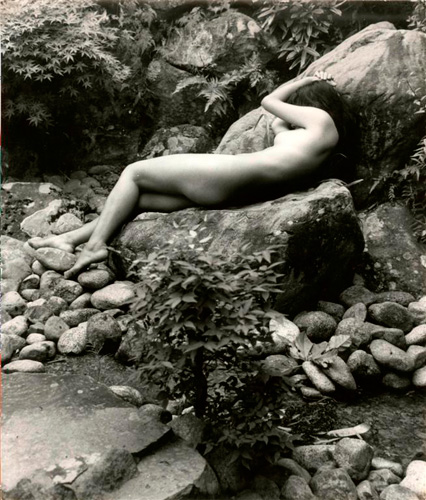 Post-war Japan experienced a revival in photography in the 1950s; with the appearance of photo-realism photographic materials were once again available, journals were being published and photographers suddenly reclaimed a broader range of subject matter. Hiroshi Hayama, in his 1957 book Ura Nihon (Japans Back Coast), set out to photograph the relationship between people and their natural environment. This paradigm reconvened pre-war photographers and encouraged the emerging generation.

Yoshiyuki Iwase, although a Tokyo law graduate and heir to his family's sake distillery, took this mantra to his ancestral village of Onjuku, on the pacific side of the Chiba peninsula and found his inspiration in ama. Ama, literally "sea women", were the women who harvested the seabed for turban shells, seaweed and abalone. He documented these subjects at work and rest, as workers, friends and mothers in their primitive beauty. Using the models that he had met at the dives, he went on to create a series of exceptional modernist nudes. Although postdating the work of Weston and Cunningham in the United States, he was working at a time in Japan when the modernist nude was being redefined artistically and was therefore a contested and prolific subject. In 1951, the photographic journal Photo Art published an issue on nudes which was banned for obscene content, sparking public controversy and debate. Iwase went on the work with contemporaries such as Asano Kiichi, Hayashi Tadahiko and Akiyama Shotaro, exhibiting his work mainly in Chiba and Tokyo. Among his many awards, Seaweed Harvest (1956) won the Japanese Prime Minister's Prize in 1957. His work is held in many collections in Japan including the Japanese Metropolitan Museum of Photography, Tokyo. Much of Iwase's work was lost after his death, making the extant vintage prints exceedingly rare.

This exhibition at BachmannEckenstein is the first exhibition devoted to Iwase's work outside of Japan, but certainly not the last.