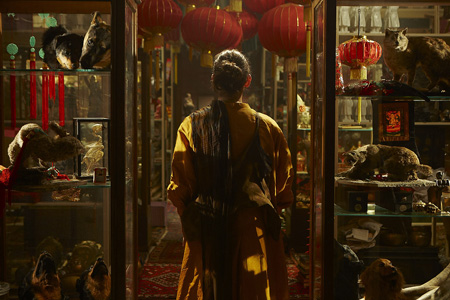 Fiona Tan (b. 1966) is interested in the cultural role of the camera, whether film or still, and how its images trigger our imagination. Images of people almost always play a central role in her photographs, films and audio-video installations, and she places great emphasis on how images "affect and inform the internal picture we have of ourselves, of others and of the world around us."

The role of language and the written word is equally fundamental to her work, and Tan personally scripts the texts and essays that accompany her films. Many of her works are defined by a back and forth shifting between visual and literal possibilities of meaning. For Tan, the audiovisual story is simultaneously one and many.

At the Dutch Pavilion, the artist will present Disorient (2009), a new video installation that draws on the city's medieval influence before the discovery of new routes to Asia diminished its power. Tan's fascination with time, history, and memory led her to explore the biography of Marco Polo, who left home at the age of seventeen and traveled extensively for the next twenty-five years. Whereas in Tan's earlier pieces, the search for identity is a psychological journey, in Venice the approach is focusing on how people relate to the city's cultural history. "I am interested in the juxtaposition of word and image, in conflicting relationships between the two and…in the slippages of truth or truths in the many versions of historical accounts."

Two other recent works will also be on view in Venice, works which were chosen to complement and enhance the overall installation by the way they are situated in the architecture. For Provenance (2008), Tan researched 17th-century, "Golden Age" portrait paintings in the Rijksmuseum in Amsterdam and responded by making six contemporary video portraits of modern Amsterdammers. In Rise and Fall (2009), images of water—turbulent, churning as well as slow-moving and placid—are focused on as a metaphor for how memory is formed.

Fiona Tan was born in Indonesia and grew up in Australia. In 1988 she moved to the Netherlands to pursue studies at the Rietveld Academie and the Rijksakademie. Her work has been exhibited widely in numerous international exhibitions and institutions including Documenta 11 (Kassel), Yokohama Triennale (Japan), Lunds Konsthall (Sweden), Pinakothek der Moderne (Munich), Tate Modern (London) and the New Museum (New York). The artist lives and works in Amsterdam, where she teaches at De Ateliers.

New York-based Saskia Bos, Curator of the Dutch Pavilion in Venice, is an art historian and a renowned curator. Since October 2005, Bos has held the position of Dean of the School of Art at The Cooper Union.

The official catalogue of the Dutch presentation will be issued by Kehrer publishers. It includes contributions by Saskia Bos, Fiona Tan, Dominic van den Boogerd, Director of De Ateliers in Amsterdam since 1995, art historian and author Doris von Drathen and Thomas Elsaesser, professor emeritus at the University of Amsterdam, Departement of Media and Culture, and since 2005 a visiting professor at Yale University.