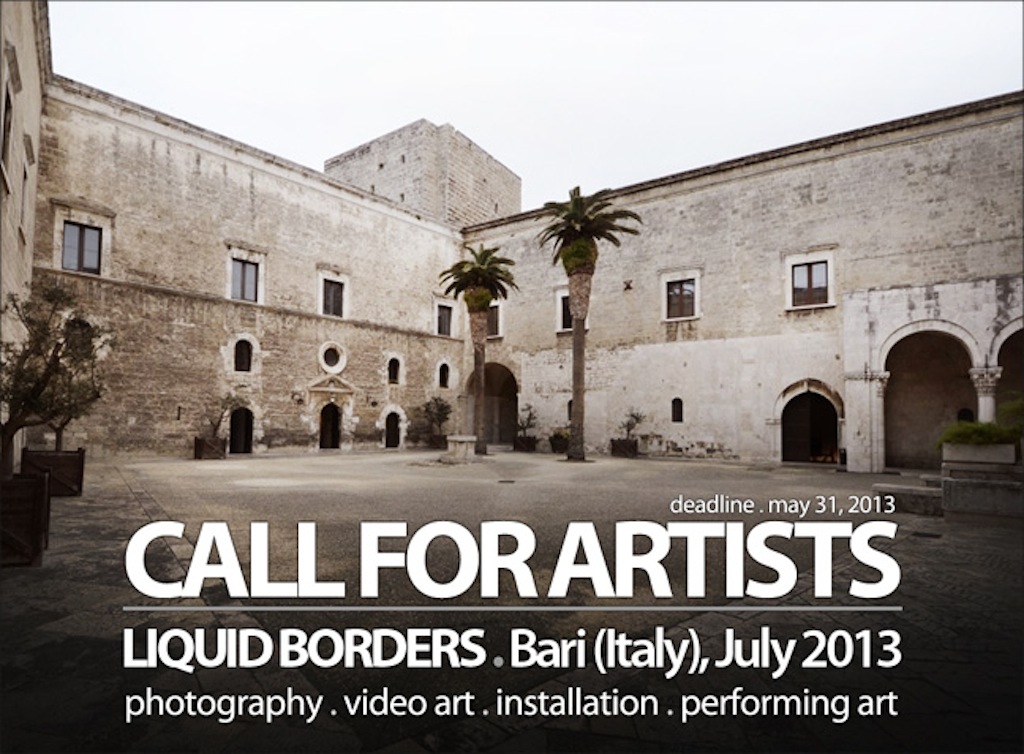 International ArtExpo is selecting all interesting photo works, video/short films, installations and performances to include in the next 2013 Exhibition:

The selection will be based on the main concept of the hybridization between physical and social identities in contemporary cities, and the mixing between people and space. Urban environments, people, rules and limits are no more distinct realities, but they constantly modify and get mixed together, generating new connections and hybrid results. Ethic, social, sexual and religious borders get confused and metropolis become a puzzle composed by different cities constantly modified by the man.

The whole city of Bari will be involved in this great exhibition, hosting international artists and artworks, collateral art events, conferences and summits.

At the end of the event Marilena Bonomo, the gallery Director of Bonomo Gallery, will award one of the artist with the participation in one of the International Exhibition organized by International ArtExpo and offered by It’s Liquid Group and 3 art residences at Palazzo Calò Carducci in Bari, Tenuta Pinto in Mola di Bari (Bari) and Palazzo Siena in Minervino di Lecce (Lecce).

The Castello Svevo (Swabian Castle) was built around 1132 by Norman King Roger II. The Castle is surrounded by a moat on all sides, except the northern section, which was bordering the sea and can be accessed from the bridge and the gate on the southern side. It is mainly composed of the Aragon walls and the main Swabian tower, and is currently used for exhibitions.

Sala Murat is a cultural space of 400 square meters located in Ferrarese Square, in the centre of Bari. It’s dedicated to art and contemporary exhibition, workshops and conferences. Inside the space it’s permanently exhibited a wall drawing by the famous minimalist artist Sol LeWitt.

Santa Teresa dei Maschi was built between 1690 and 1696 as reported in the tympanum of the front lunette. The interior has a Greek cross with arms covered with barrel vaults and the central square covered by a pointed arch dome. Inside can be admired paintings by Andrea Miglionico and some ancient sculptures of the mysteries of the Passion of the Christ from the church of Vallisa. The cloister is the seat of the Provincial Library for Culture and Arts "De Gemmis", given in 1952 by Baron de Gennaro Gemmis.

To take part in the selection, send your works submissions with a CV/biography, videography and some still images (only for video artists and performers), some samples of works via email to lucacurci@lucacurci.com or via mail to:

The number of works you can submit is free and unlimited. The participation in the International Art Festival requires an entry fee only for selected artworks. Participation open to: artists, architects and designers, associate groups and studios.

International ArtExpo is a not for profit organization that provides a significant forum for cultural dialogue between all artists from different cultures and countries. ArtExpo is grateful to all of the institutions, corporations, and individuals who support our artistic projects. We work with a number of national and international galleries as well as publishers, museums, curators and critics from all over the world. We help artists through solo and group exhibitions, gallery representation, magazine reviews and advertisements, press releases, internet promotion, as well as various curatorial projects.