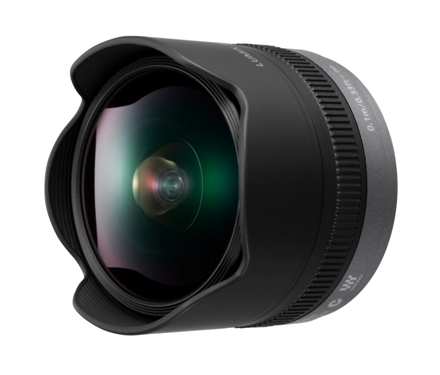 The new LUMIX G FISHEYE bringing an distinctive perspective and unique deformation effect. photos but also movies an extraordinary view to add an impressive scene to the story even for TV contents, films and web movies.
The closest focusing distance / F3.5 incorporates inner focus system which enables
do not have to come closer to the subject even for the The new LUMIX G FISHEYE 8mm / contrast AF system when mounted on the LUMIX G Micro System comfortable and enjoyable shooting. Seven blades give the aperture a rounded shape that produces an attractively smooth effec aperture settings. Also, a sheet filter such as a gelatin filter can be inserted in the rear of the unit for free filter expression.

Comprising ten lenses in nine groups, the new lens system features an outstanding compactness, taking advantage of the Micro Four Thirds system standard to achieve dramatic downsizing to the world’s smallest and lightest size*. The
adoption of an ED lens achieves a stable descriptive performance from close-up to infinity minimizing chromatic aberration and distortion. ing is as short as 0.1m, however, the LUMIX G a long working distance and users
close-up shots.

F3.5 lens allows use of the high-speed and accurate camera effect in out-of-focus areas when shooting at larger expression. Japan, the United States, the European Union and mera New-Generation 180-degree, he s FISHEYE 8mm ameras, for more for use in even under pan,