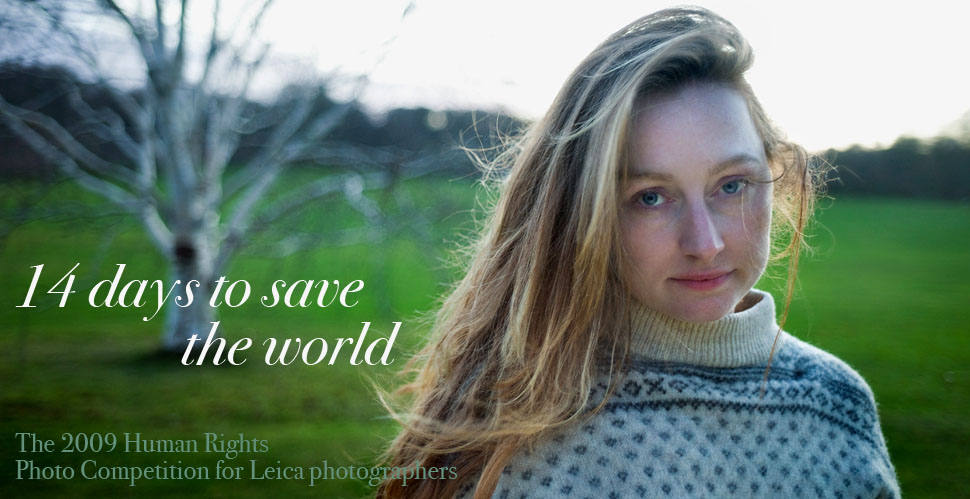 Deadline for entries is December 10, 2009 at midnight.

Entry and formats:
Pictures must be submitted no later than midnight your local time on December 10, 2009. The end date, December 10, marks the 61th anniversary for the United Nations Declaration of Human Rights (see more in the bottom of the page).
Each picture will end in a format of 640 pixels wide in the gallery why this is the minimum format to submit. You may resize your image(s) to fit that format (the jury may require a larger version if needed for proper judging).
The format must be JPG and file size no larger than 8 MB per image.
Each single image should contain: Photographers name, camera and and lens used. Maintain EXIF data and as much as possible information in the file. If you feel an image needs a caption, feel free to add this in the caption field of the file (open the image in Photoshop > File > File info and then insert the caption in the "Description" field). You may also enclose the description as text in the e-mail.
Single images entry: Add a prefix to the file name 01-, 30-, 22-, etc. depending on which Human Rights article the image is illustrating. Example: An image about copyright would be human rights article no 27 why the image file name would be for exampe: 27-9990168.JPG.
Stories entry: Send a folder or a zipped folder where the folder has a prefix for the human rights article you are illustrating. Example:
10-my_folder.zip.
The images inside the folder should be named with a number and letter to illustrate the human rights number and the sequence of the images, for example:
27-A-9990363.JPG
27-B-9980122.JPG
27-C-1220110.JPG
27-D-libanon-car.JPG
27-E.JPG

Winners:
A main winner will be announced on January 10, 2010 and will be awarded a certificate "Winner of the 2009 Human Rights Photo Competition for Leica Photographers" and a 160GB iPod Classic in black or silver (or a gift card) from the competion sponsor, B&H Photo Video.
Winners in each category of the 30 human rights will be abbounced and will recieve a certificate. The judges may also issue honorable mention of more than those images.

The gallery of images:
A gallery with the images will be made public at a point after December 10. By submitting images you allow your image(s) to be shown in the gallery. You retain copyright on all image(s) and these will not be used any other place than in the gallery without your permission.

What are the human rights?

The background for this competition is the human rights. Yes, we all know them, it's ... year, what are they exactly? How many rights are there? Who are they for?
Don't be shy to admit you don't know them by hearth. Here's the short version of them for inspiration and so you can get going with ideas. Further below is a longer story on the human rights and their background.

The 30 human rights in short form:
(Click here for the long form at the United Nations website in English):

06: You Have Rights No Matter Where You Go

07: We're All Equal Before the Law

08: Your Human Rights Are Protected by Law

14: The Right to Seek a Safe Place to Live

15: Right to a Nationality

17: The Right to Your Own Things

20: The Right to Public Assembly

21: The Right to Democracy

25: Food and Shelter for All

26: The Right to Education

30: No One Can Take Away Your Human Rights

The background for human rights

"All human beings are born free and equal in dignity and rights," so says Article 1 in the Declaration of Human Rights. It's an rather important point that it is for all human beings, and that you are born with them. You don't have to register for it, and it doesn't require education or wealth. Even if you're a criminal in prison you still have those rights.

Now, my personal experience with human rights, and one of the reasons I thought of this photo competition, is that claiming ones own human righs are easy. What is the really hard thing to do is to observe others human rights. Let's just take a very simple human right which is the Article 27 that deals with copyright. It is easy to read that when you take a photograph, you are the owner and have rights. The tricky part is to observe that others rights are also respected. Do you allow friends to pirate copy movies? One thing is that it is illegal and a hot issue these days, but could - or should - you do something to observe that right for others? And when some say we should skip copyright on the internet, what should we think about it? And why was it a human right in the first place?

In some countries we consider our self to be well within human rights. But is that so? Well, first thing is to find out what the actual human rights are, next thing is to look around and see how that would apply. When is physical violence an act of torture, and when is mental harrasment an act of torture? Can you force school kids to do home work, can you threathen the canteen lady to serve you more patatoes? What does torture mean and could torturing someone be the greatest good for mankind as some have implied?

Many wars have started because some considered others less worthy
One could say that the Declaration of Human Rights was made in 1948 after two world wars to "end all wars and conflicts" because what it seeks to install is respect and peace. It was adopted and proclaimed by General Assembly resolution 217 A (III) of 10 December 1948.

The idea of human rights was not new in 1948. The Cyrus cylinder from 539 BC is considered to be the first document of human rights, created following the Persian conquest of Babylon. In 1215 came Magna Charta (the Great Charter of Freedoms) which was an attempt of the Barons of England to limit the kings powers by law and protect their privileges. And so it goes on with the United States Declaration of Independence of 1776, and Bill of Rights in 1791 and the Geneva Conventions in 1864.

Today all 192 member states of the United Nations have adopted the Universal Declaration of Human Rights, and a body of international law exists to protect them. The Declaration remains the central call to freedom and justice for all peoples throughout the world.

Yet although human rights exist, are recognized at least in principle by most nations, and form the heart of many national constitutions, the actual situation in the world is far distant from the ideals envisioned in the Declaration.

Though the Declaration of Human Rights was in place already in 1948, Martin Luther King was marching for them in the sixties. As one example of the fact that just because something has been written down and agreed upon by many nations it doesn't mean that it's a reality from that moment. It takes understanding and work to make human rights a reality!