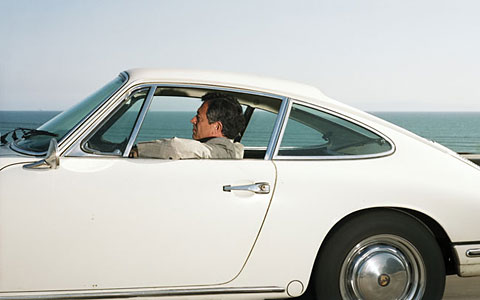 Begun in 1989, Andrew Bush's series Vector Portraits was taken while the artist drove the city streets and freeways of Los Angeles.  Either stopped in traffic or traveling at speeds of 20 to 70 miles per hour, the artist took portraits of other drivers using a medium-format roll-film camera and flash attached to the passenger side door of his car.  Extended titles note particulars of speed, location or time with scientific precision while leaving other details unclear, such as "Man traveling southbound at 67 mph on U.S. Route 101 near Montecito, California, at 6:31 p.m. on or around Sunday, August 28, 1994".

The photographs capture subjects in the ambiguous combination of private and public space created by a "private room on wheels."  The drivers are either alone in their vehicles lost in thought, or with passengers, revealing the dynamic between families, couples or friends.  An examination of people and their cars in a city famous for its car culture, the series addresses personal privacy and challenges our definition of public space.

Andrew Bush's work is held in the collections of institutions such as the Metropolitan Museum of Art, New York; the Victoria & Albert Museum, London; the Museum of Fine Arts, Houston; and the Museum of Modern Art, New York.  He completed his Masters of Fine Arts in Photography at Yale University in 1982.  Born in 1956 in St. Louis, Mr. Bush currently lives and works in Los Angeles.  In 2008, Yale University Press published the book Drive, which includes an interview of the artist by Jeff L. Rosenheim, a curator of photographs at the Metropolitan Museum of Art, New York.

This exhibition is presented in conjunction with Julie Saul Gallery, 535 W. 22nd Street, New York City, where large-scale work from the Vector Portraits series will be on view.