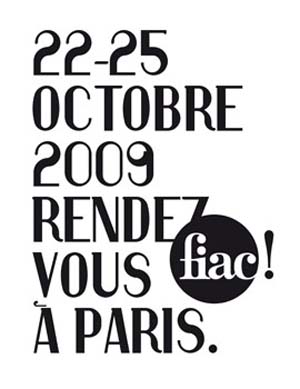 The 35th edition of FIAC was held from October 23rd to 26th in the Grand Palais, the Cour Carrée of the Louvre and in the Tuileries. 189 galleries exhibited at FIAC 2008, representing 22 countries, with 117 foreign galleries and 72 French galleries.

FIAC 2008: attendees included collectors, people from the art world and the general public; the quality of the exhibitions was highly appreciated, the market appeared solid.

- Collectors and French and foreign professionals attended the inauguration of FIAC: an increase of 15% compared to 2007, more than thirty groups of collectors and foreign professionals (friends of museums, associations of collectors, trustees…) from England, the United States, Italy, Portugal, Brazil, Israel, Russia, Belgium, Monaco, Austria, Switzerland, Japan, Dubai and the Emirates and Mexico… as well as several groups of French collectors, made appointments to meet up at FIAC. Some notable attendees were the "Bizot Group" composed of the directors of the major museums in the world (Moma, Tate Modern, The National Gallery, the Louvre, the Musée d’Orsay…), as well as the International Association of Corporate Collections of Contemporary Art (IACCA) whose members are curators of the most important corporate collections (Deutsche Bank, ABN Amro, Fondation Neuflize Vie, Banco Espirito Santo…).

- More than 2,000 references in the national, regional and international press and audiovisual programmes.

The cultural program presented at this 35th edition of FIAC was extremely successful. It included:

- 17 outdoor projects in the Tuileries, of which the following were particularly, appreciated pieces:
The "Fontain" by Bertrand Lavier, the six cabins "Tree Huts" by Tadashi Kawamata installed at the top of the Tuileries’s highest plane trees, Michelangelo Pistoletto’s large cage, "Spazio Libero", the "Pavillon – Seurat, no Monet" specifically created by Dan Graham in full view of the Orangerie, the "Suspended Garden" by Mona Hatoum, as well as "Plane Landing" by Aleksandra Mir presented on Monday the 20th and Thursday the 23rd on the esplanade of the Tuileries.

A notably energetic artistic scene: A program of exceptional events during FIAC, 61 events, visits, performances, seminars, private dinners… were offered within the Parcours Privé that brought together almost 2,000 people. 52 exhibitions and 66 gallery openings took place during the week of FIAC.

Rendez-vous in 2009!
The 36th edition of FIAC will be held from October 22 - 25 in the Grand Palais, Cour
Carrée of the Louvre and the Jardin des Tuileries