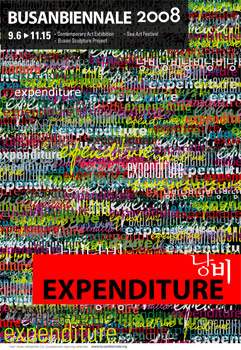 The 2008 Busan Biennale unfolds at the Busan Museum of Modern Art, Gwangalli Beach, and APEC Naru Park between September 6th to November 15th under the theme of "Expenditure." Made up of the Contemporary Art Exhibition, the Sea Art Festival, and the Busan Sculpture Project, the 2008 Busan Biennale will exhibit a distinctive philosophy of "expenditure" and a vivid scene of contemporary art through a variety of artworks including paintings, photographs, videos, installations, outdoor
sculptures, etc.

The theme of the 2008 Busan Biennale, "Expenditure," was borrowed from Georges Bataille's discussion. Since it means consumption, release, and exhaustion, and extends into extravagance and reckless expenditure, "expenditure" is a concept contrary to goal-oriented, power-oriented, and phallic economic concepts, such as production, moderation, accumulation, acquisition, regime, control, etc. Though it has political and economic implications, it also has a great deal of implications for the perspectives of aesthetics and cultural criticism. Bataille pointed out that all studies had pursued to understand a society or a culture through the lens of production and accumulation and this had been an attempt to look at the whole from a part of a society or a culture, leading to a half-baked interpretation. According to Bataille, a complete discussion could be produced when we look at a society or a culture through the lenses of spending, consumption, exhaustion, etc., or concepts that are the antipodes of production, accumulation, acquisition, control, etc., that is, concepts employed in existing discussion methods. He asserted that, after all, culture had been maintained through activities deemed meaningless, such as releasing and consuming what was produced and accumulated.

The 2008 Busan Biennale attempts to reinterpret the trends of contemporary art as the aesthetics of "expenditure" through a microscopic lens, as well as to interpret "expenditure" through a macroscopic lens from the perspectives of cultural theories. Differentiating itself from existing biennales, which focus on exhibiting latest art trends "with speed" and "in abundance," the 2008 Busan Biennale seeks to illuminate and predict the latest directions of contemporary art, from paintings to sculptures to videos, under the theme of "expenditure," employing thorough analyses and maintaining critical views.

First, the Contemporary Art Exhibition will unfold at the Busan Museum of Modern Art, Busan Yachting Center, and other places, under the direction of Kim Won-bang, a professor at Hongik University and art critic, exhibiting some 120 works of 100 artists from 20 countries. The Contemporary Art Exhibition, whose theme is "Expenditure, Art, Culture," presents the driver of today's cultural activities through the concept of expenditure, shifting directions from existing production-oriented and appearance-centered values to the disintegration of supernatural values and power of culture.

The Sea Art Festival will be hosted in the Gwangalli Beach, nearby shopping centers, Samik Leports Town, Geumnyeonsan Subway Station, etc. under the direction of Jeon Seung-bo, an independent curator. Some 60 artists from 20 countries will participate in the Festival with 70 artworks. The Sea Art Festival, whose theme is "Voyage Without Boundaries," seems to be in line with the theme of the biennale, "Expenditure," in that the Festival embraces contradiction and paradox as the essence of life, addressing formation and creation.

The Busan Sculpture Project, which is headed by a sculptor Yi Jeong-hyeong, is hosted in APEC Naru Park, inviting 20 works of 20 artists from 15 countries. The theme of the Busan Sculpture Project, "Avant Garden," combined "Avant" from avant-garde with "Garden," which indicates a more private space than a park. Thus, "Avant Garden" implies the intention of transforming everyday spaces into creative ones by combining epistemological and aesthetic notions with ordinary parks.