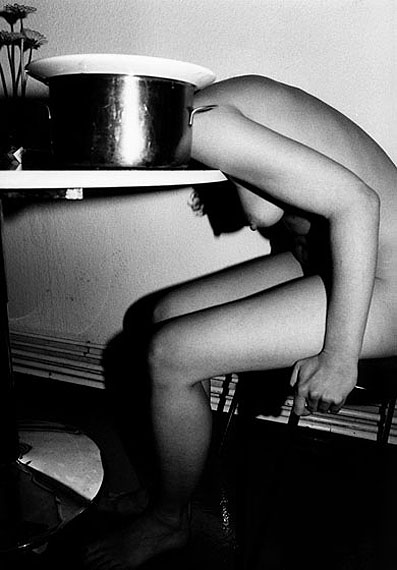 The Galerie d'Art Contemporain Am Tunnel & Espace Edward Steichen will be showing TURN ON THE BRIGHT LIGHTS - a retrospective of the work of the artist Petra Arnold (*1966 in Heidelberg) - from 5 July 2010 to 16 January 2011, which will include over 150 photographs from the period 1996 – 2010. A large number of the photographs exhibited are vintage prints.

Visitors will not see any bright, prettified, realist images, but pictures where black is dominant, emphasising the contradictory realities of life. In opposition to the title of the exhibition, the photographs transform the found reality into a world with a rather gloomy cast. In spite of this, the images always capture life as it is found. The atmosphere in Petra Arnold‘s photographs might seem dark at first glance, but it still possesses its own kind of light, expressing extreme intensity.

Petra Arnold’s work does inhabit primarily classical photographic genres – portraits and reportage – yet the lines between documentation and art are blurred. Alongside portraits of musicians, interesting and borderline characters, the artist also focuses on street photography. Her many trips to San Francisco and New Orleans have produced images that reflect the impartial view of the photographer as authentic moments. These encounters and personalities are compelling. There is also often evidence of her special interest in marginal social groups, and the exhibition includes photo-reportage of the “Starlight” travelling circus and the “Hells Angels Luxembourg“. However different their way of life might seem, these groupings still share a common denominator, which the photographer finds especially interesting: the individual feels a sense of belonging to his own particular “constellation”. In her extensive reportage work, Arnold sometimes follows people for months or years, actually becoming part of the group herself for that period. This is the only possible way to capture personal pictures from people’s lives that allow an intimate insight into the characters within their social circle. When you put the individual pictures together, they create stories – just like a visual diary.

In her latest series entitled “Stills”, the photographer is fascinated by the everyday found world. Taken only casually, these still lives are at the very least intimate images, and range from sensitive still life pictures of flowers to a plate that hasn’t been cleared. These scenarios have the effect of frozen stills from a film, and there are actually some to be found: the artist photographs a TV image, using the screen shot to explore the reproducibility of images.

Petra Arnold has been working with the medium of Polaroid for many years, preferring to use film that is past its sell-by date to give even more room for uncontrollability and randomness. The special fascination of this medium lies in both the soft contrasts and diffused blurring and the unique nature of the moment captured. The concept of the unrepeatable moment reveals parallels between the Polaroid and a live music performance, which is just as uncontrolled and unique as an immediate photograph. David Gould, the leader of the hard rock band “Mother Tongue”, which Petra Arnold has followed on several tours, expresses this similarity perfectly: “Catch the essence of the moment. Do it right now and right there. Just have that energy about you in life. It's now or never - a great approach to art and to life!”